Engineers working to reverse the proliferation of greenhouse gases know that in addition to reducing carbon dioxide emissions we will also need to remove carbon dioxide from power plant fumes or from the skies. But what do we do with all that captured carbon? Matteo Cargnello, a chemical engineer at Stanford University, is working to turn it into other useful chemicals, such as propane, butane, or other hydrocarbon fuels that are comprised of long chains of carbon and hydrogen.

“We can create gasoline, basically,” said Cargnello, who is an assistant professor of chemical engineering. “To capture as much carbon as possible, you want the longest chain hydrocarbons. Chains with eight to 12 carbon atoms would be the ideal.”

A new catalyst, invented by Cargnello and colleagues, moves toward this goal by increasing the production of long-chain hydrocarbons in chemical reactions. It produced 1,000 times more butane – the longest hydrocarbon it could produce under its maximum pressure – than the standard catalyst given the same amounts of CO2, hydrogen, catalyst, pressure, heat and time. The new catalyst is comprised of the element ruthenium – a rare transition metal belonging to the platinum group – coated in a thin layer of plastic. Like any catalyst, this invention speeds up chemical reactions without getting used up in the process. Ruthenium also has the advantage of being less expensive than other high-quality catalysts, like palladium and platinum.

Cargnello and his team describe the catalyst and the results of their experiments in their latest paper, published Feb. 8 in the journal Proceedings of the National Academy of Sciences.

Cargnello and his team took seven years to discover and perfect the new catalyst. The hitch: The longer the hydrocarbon chain is, the more difficult it is to produce. The bonding of carbon to carbon requires heat and great pressure, making the process expensive and energy intensive.

In this regard, the ability of the new catalyst to produce gasoline from the reaction is a breakthrough, said Cargnello. The reactor in his lab would need only greater pressure to produce all the long-chain hydrocarbons for gasoline, and they are in the process of building a higher pressure reactor.

Gasoline is liquid at room temperature and, therefore, much easier to handle than its gaseous short-chain siblings – methane, ethane, and propane – which are difficult to store and prone to leaking back into the skies. Cargnello and other researchers working to make liquid fuels from captured carbon imagine a carbon-neutral cycle in which carbon dioxide is collected, turned into fuel, burned again and the resulting carbon dioxide begins the cycle anew.

The key to the remarkable increase in reactivity is that layer of porous plastic on the ruthenium, explained lead student author Chengshuang Zhou, a doctoral candidate in Cargnello’s lab, who conducted the search and experimentation needed to refine the new coating. An uncoated catalyst works just fine, he said, but only produces methane, the shortest chain hydrocarbon, which has just a single atom of carbon bonded to four hydrogens. It’s not really a chain at all.

“An uncoated catalyst gets covered in too much hydrogen on its surface, limiting the ability of carbon to find other carbons to bond with,” Zhou said. “The porous polymer controls the carbon-to-hydrogen ratio and allows us to create longer carbon chains from the same reactions. This particular, crucial interaction was demonstrated using synchrotron techniques at SLAC National Laboratory in collaboration with the team of Simon Bare.”

While long-chain hydrocarbons are an innovative use of captured carbon, they are not perfect, Cargnello acknowledges. He is also working on other catalysts and similar processes that turn carbon dioxide into valuable industrial chemicals, like olefins used to make plastics, methanol, and the Holy Grail, ethanol, all of which can sequester carbon without returning carbon dioxide to the skies.

“If we can make olefins from CO2 to make plastics,” Cargnello notes, “we have sequestered it into a long-term storable solid. That would be a big deal.”

No current conflict of interest for any authors. However, if technology gets commercialized, senior author and perhaps others could benefit financially. 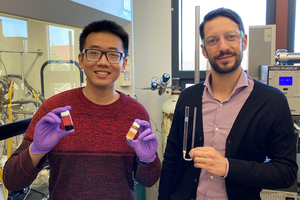 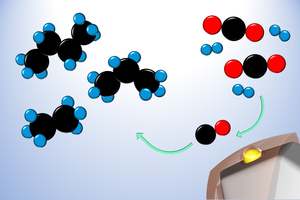