A new study led by Prof. DING Lin from the Institute of Tibetan Plateau Research (ITP) of the Chinese Academy of Sciences has revealed the evolution of the Central Tibetan Valley, which may shed light on the formation of Tibetan Plateau.

The findings were published in Science Advances on Feb. 10.

The growth of Tibetan Plateau has attracted much attention since the 19th Century for its influences on the regional and global climate and biodiversity.

Previous researches indicate that around 60 million years ago (mya), before the collision of the Indian and Eurasian plates, a wet and low elevation Valley system existed between the high Gangdese Mountains on the southern margin of Eurasia and the Central Watershed Mountains in the north.

Therefore, the uplifting history of the Central Tibetan Valley has become the key to reveal when and how Tibet started the transition from "low and wet valley" to "high and dry" plateau we know today.

Since 1997, Prof. DING has led several field investigations with his team in the Lunpola Basin within the center of the Valley, now at an elevation of almost 5,000 m, and collected a large number of samples for radiometric dating and clumped isotope analysis in order to document changes in surface height and climate over time in the Valley.

The researchers found nine layers of volcanic tuffs in the Niubao and Dingqing formations. They determined the radiometric age of these volcanic tuffs to establish the absolute age framework across Eocene and Oligocene sediments in the Lunpola Basin, which is critical for pinpointing the exact point of transition from valley to plateau.

To obtain ancient land surface heights, DING's team first used modeling parameters (including soil moisture, precipitation, evaporation and surface temperature) to determine when in the year the paleosol nodules were likely to have formed. Then, they transferred clumped isotope temperature of paleosol nodules into wet-bulb air temperatures that decline with increasing height. Wet-bulb temperatures incorporate changes in humidity as air travels over land surfaces; thus, it is far more reliable for reconstructing past elevations.

With the rise of the Central Tibetan Valley and the cooling of the global climate through the Oligocene, temperature and precipitation in the central plateau decreased significantly, and the influence of the monsoon was more strengthened.

Climate change further led to the transformation of the central Tibet from one that hosted a warm-humid, low-elevation subtropical ecosystem and served as an incubator for today's exceptional Asian biodiversity, to a high, cold-dry alpine ecosystem.

Based on various evidence of paleo-elevation, tectonics, and magmatism in the region, Prof. DING and his team suggest a new model of Tibetan Plateau formation. In this model, the subducting Lhasa mantle fell away and/or was thermally eroded, allowing upwelling of the asthenosphere. This softened the crust above and facilitated shortening driven by the relentless northward movement of India.

The rise and demise of the Paleogene Central Tibetan Valley 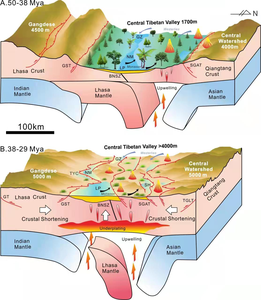 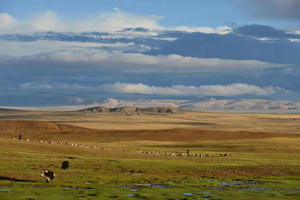