The evolution of the sea star, sea urchin, and other echinoderms’ body shape during the Cambrian and Ordovician periods was faster and more dramatic than their ecological innovation, according to a new study by paleontologists at Benedictine University, University of West Georgia, and University of Tennessee, Knoxville.

The pattern contradicts long-standing expectations for how a group of organisms diversify to fill different ecological niches, also known as adaptive radiations. Findings suggest that more attention be paid to the evolutionary interactions between anatomical form and ecological function during major evolutionary events.

Expectations for how adaptive radiations occur date back to Darwin’s Galapagos finches. After the first birds colonized a barren island, they spread across the islands and diversified to specialize on the novel food sources that already existed. In the process, each new species evolved slightly different beak shapes.

Because evolutionary radiations are geologically rapid, it is hard to disentangle such causes and effects. Prior studies have typically used a single data set of anatomical traits, dividing it into ecologically relevant versus anatomically less-functional partitions.

“To truly contrast morphology and ecology in an apples-to-apples way, it’s critical we compile each data set independently, but in a similar way so they can be compared fairly,” said Phil Novack-Gottshall, professor of biological sciences at Benedictine University and lead author of the study.

“Conducting the study within a phylogenetic framework allows us to determine whether changes seen in these data sets result from either unique or convergent evolutionary events,” said Colin Sumrall, associate professor of earth and planetary sciences at the University of Tennessee, Knoxville.

The researchers next turned to how these rates impacted the evolution of new anatomical forms and ecological functions. They discovered that echinoderms evolved dramatically different body plans as soon as they show up in the fossil record, and this anatomical inventiveness continued throughout the Cambrian.

In contrast, ecological innovation was depressed throughout the Cambrian, with most new life habits not evolving until the Ordovician radiation.

“The oddness and almost alien aspect of Cambrian ecosystems has captured both scientific and public attention for over a century, but our results indicate that at least initially appearing weird does not necessarily mean acting weird,” said Bradley Deline, professor of geology at University of West Georgia.

“Most paleontologists assume because morphology and ecology are two sides of the same coin, their evolution will parallel each other. But that is not what we’re seeing in the earliest echinoderms,” Novack-Gottshall said.

Due to the enormity of the data sets, they enlisted many undergraduate students at their respective institutions to help.

“Echinoderm body plans, especially those seen in the Paleozoic, are very diverse and complex. These anatomical differences require scrutiny when compiling robust data,” said Nick Smith, a student in Deline’s lab and now a graduate student with Sumrall.

“There’s a difference between learning about evolution and being able to actually measure and document it,” said Ali Sultan, a researcher in the Department of Biological Sciences at Benedictine University. Novack-Gottshall concurs, noting “one of the hallmarks of liberal arts institutions is that students have opportunities to participate in exciting research.”

The researchers hope the study will spur others to spend as much time on developing functional data sets as they do on anatomical ones. Evolutionary radiations involve dramatic changes to both morphology and ecology, and it is critical to pay attention to both to tease apart the ultimate causes of these important events.

The study’s findings are published in the current issue of Nature Ecology & Evolution at https://www.nature.com/articles/s41559-021-01656-0. The research team was led by Dr. Phil Novack-Gottshall, Professor of Biological Sciences at Benedictine University (Lisle, IL) with Dr. Bradley Deline, Professor of Geology at University of West Georgia (Carrollton, GA); Dr. Colin Sumrall, Associate Professor of Earth and Planetary Sciences at the University of Tennessee, Knoxville; and eight then-undergraduates at their institutions. 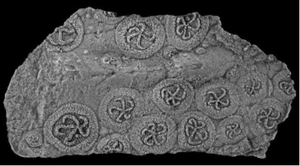 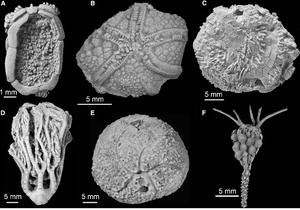 Fossil echinoderms including the common Cambrian and Ordovician echinoderms