Just like human parents prepare soft food for the babies, many animal parents prepare food for their offspring so that the offspring can digest the food better. For example, insectivorous birds remove hard body parts such as insect wings or toxic parts such as bee stings before feeding the prey to their nestlings. Preparing prey takes time and energy and therefore it is not expected that parents prepare the prey that is soft and does not have any toxic parts. However, the new discoveries by a team of Korean and Polish ecologists affiliated with the Laboratory of Behavior Ecology and Evolution at Seoul National University (Korea), the Laboratory of Integrative Animal Ecology at DGIST (Korea), and Behavioral Ecology Group at the Museum and Institute of Zoology, PAS (Poland) suggest that the birds specialized at hunting earthworms and feeding them to their offspring have evolved a special prey preparation behavior: earthworm sundering. The findings of the study on earthworm sundering by the Fairy Pitta (Pitta nympha) are reported in the Journal of Ornithology (https://link.springer.com/article/10.1007%2Fs10336-021-01955-0).

The field research on the Fairy Pitta was conducted in the Hallyeohaesang National Park (https://english.knps.or.kr/Knp/Hallyeohaesang/Intro/Introduction.aspx?MenuNum=1&Submenu=Npp) located in the southern part of the Republic of Korea (127°54′E, 34°50′N; https://www.google.co.kr/maps/search/https:%2F%2Fenglish.knps.or.kr%2FKnp%2FHallyeohaesang%2FIntro%2FIntroduction.aspx%3FMenuNum%3D1%26Submenu%3DNpp/@34.7943501,127.9363594,28365m/data=!3m1!1e3?hl=en) by Mr. Jinseok Park, the first author of the paper and a PhD student at the Seoul National University. Already as a high-school student, Mr. Park found nests and observed, filmed, and photographed the breeding behavior of the Fairy Pitta, an endangered and relatively rare species (total population size is speculated to be about 10,000 individuals). Later, as the PhD student he analyzed the data under the supervision of Dr. Piotr G. Jablonski (Seoul National University) and Dr. Sang-im Lee (DGIST), the co-authors of the paper. The study found that the parents often cut an earthworm into smaller pieces immediately after capturing, put it on the ground, and continue searching for a new earthworm, which is also placed at the same spot. After several earthworms are collected, the bird picks up all of them in the beak (Fig. 1) and flies to the nest to feed the nestlings (Fig. 2). “I have observed that parents sunder earthworms more often when nestlings are younger and when the earthworms are longer. Thus, we believe that the parent pittas sunder earthworms in order for the smaller, younger nestlings to swallow the food better” comments Mr. Park.

(1) Earthworm sundering might help parents to carry the prey to the nest because long earthworms hanging down from the beak may negatively affect bird’s flight;

(2) Earthworm sundering may reduce the risk of visual detection by predators as the nestlings can quickly swallow sundered prey, and therefore parents can stay for shorter time at the nest where they can be easily detectable due to their colorful body;

(3) Earthworm sundering may reduce the mobility of prey so that parents can deposit the captured prey on one spot of the ground while they hunt for more earthworms.

“These explanations can all contribute to the evolution of the earthworm sundering in the Fairy Pitta” says Dr. Sang-im Lee.

The researchers also browsed through photographic evidence available at the Macaulay Library at the Cornell Lab of Ornithology (https://www.macaulaylibrary.org/) and found out that multiple species from several families world-wide also sunder earthworms. “This is the first quantitative analysis of this specific prey preparation behaviour known to occur in various avian vermivores (birds whose main diet are worms)” concludes Dr. Jablonski.

This work is a good example of birds with a narrow diet using specialized behaviors to handle the prey. However, after looking through the photos available online, it became clear to the authors that more field studies are needed to understand this behavior. “Field studies in natural habitats are at the heart of ecology. But, most of all, studying animals in the field is fun!” says Mr. Park.

Sundering of earthworms by the Fairy Pitta (Pitta nympha): an unexplored strategy of prey preparation for brood provisioning by avian vermivores

no conflict of interest present 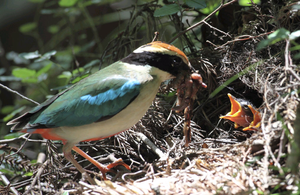 The Fairy Pitta feeding its nestlings