This is a common press release of Stockholm University and the Alfred Wegener Institute.

Single individuals of Atlantic cod and squid occur much further north than previously expected. Scientists participating in the international MOSAiC expedition with research icebreaker Polarstern  have found fish and squid in deep water in the middle of the Arctic Ocean. The results from Stockholm University, the Alfred Wegener Institute and colleagues in the European Fisheries Inventory in the Central Arctic Ocean (EFICA) Consortium are published today  in the scientific journal Science Advances.

Small fish occur at very low abundances in the 200-600 m deep Atlantic water layer of the Amundsen Basin as shown by the unique hydroacoustic dataset collected by the EFICA Consortium that showed a “deep scattering layer” (DSL) consisting of zooplanktion and fish along a 3170 km long track of the MOSAiC expedition.

Therefore, it was a big surprise when suddenly four larger fish were caught at 350–400 meters of depth. An even bigger surprise to the research team was that three of the fish were Atlantic cod, a predatory species that is not supposed to live this far north and, being a coastal fish, not in an four kilometers deep ocean basin more than 500 kilometers away from any coastline. With a deep-sea camera deployed underneath the sea ice, the scientists also discovered that Atlantic armhook squid and Atlantic lanternfish occur much further north than previously known.

The Atlantic cod originated from Norwegian spawning grounds, and had lived in Arctic water temperature (-1 to 2 oC) for up to six years laboratory analyses showed. The fish preferred the Atlantic water layer, a slightly warmer water mass (0-2 oC) that reaches far into the Arctic basin in-beteen the surface and deeper water layers which are below 0 oC.

“So, even if the Atlantic cod does not have its own central Arctic stock, this research shows that it can survive. A small number of individuals seem to find enough food to stay healthy for a longer time,” says Pauline Snoeijs Leijonmalm, coordinator of the EFICA Consortium and professor in marine ecology at Stockholm University.

New insights in the functioning of the pelagic food web

The study thus adds a new trophic level to the pelagic food web of the central Arctic ecosystem – that of large predatory fish and squid. Together with the smaller fishes in the DSL, continuous immigration of larger Atlantic fish contributes to potential food for mammals since seals and walrus can dive down to the Atlantic water layer.

“The availability of small and even some larger fish in the Atlantic water layer could explain why seals, walrus and polar bear can be found even at the North Pole. Both fish and mammals are very few, but they are there,” says biologist Dr. Hauke Flores, Alfred Wegener Institute.

The new study also found that diel vertical migration of the DSL is absent during the polar night, half a year of continuous darkness (DSL at 100-250 m), and the polar day, half a year of continuous light (DSL at 300-500 m). This implies that the carbon flux from shallower to deeper water through daily vertical migration of the DSL is hampered in the Central Arctic Ocean compared to all other oceans.

“During the short productive season of the polar day the DSL will remain in the deeper part of the Atlantic water layer 24 hours per day, even when the sea ice disappears, because this process is regulated by the availability of light” says Pauline Snoeijs Leijonmalm.

Based on their scientific results, the authors of the new paper in Science Advances conclude that – at least in the Eurasian Basin – there are no harvestable fish stocks today or in the near future.

“This was expected because the Central Arctic Ocean has very low nutrient concentrations and very low biological productivity. Even if more Atlantic fish and their prey would be advected with the water inflow from the Atlantic Ocean, the capacity of the Central Arctic Ocean ecosystem to support larger fish stocks is without doubt rather limited,” says Pauline Snoeijs Leijonmalm.

Pauline Snoeijs Leijonmalm stresses that it is of great importance that this fragile but fully functional ecosystem will receive robust international protection similar to Antarctica.

Global warming strikes the Artic region harder than the rest of the globe and climate models predict that the opening up of the Central Arctic Ocean for non-ice-breaking vessels is just a matter of decades. Since most of the area consists of high seas – international waters outside national jurisdictions – possible future human activities here are debated at national and international political levels.

Taking a precautionary approach, Canada, China, Greenland (Kingdom of Denmark), Iceland, Japan, Norway, Russia, South-Korea, the USA and the European Union negotiated the Agreement to Prevent Unregulated High Seas Fisheries in the Central Arctic Ocean (CAO) that entered into force on 25 June 2021. The ten partners of the Agreement will soon be launching a large Joint Scientific Research and Monitoring Program to collect new fish and ecosystem data in the Central Arctic Ocean. The EU has already started this work by financing the EFICA Consortium’s ecosystem research on the MOSAiC expedition (2019-2020), and the Synoptic Arctic Survey expedition with the Swedish icebreaker Oden (2021). The new paper in Science Advances is the first scientific paper presenting new field data in the context of the agreement.

“This agreement prevents any commercial fishing for at least 16 years to come, and puts “science first”, warranting scientific assessments of the status and distribution of possible fish stocks in the Central Arctic Ocean and the ecosystem supporting them – a wise political decision and a good start towards full protection”, says Pauline Snoeijs Leijonmalm.

Facts on the MOSAiC expedition: During the Multidisciplinary drifting Observatory for the Study of Arctic Climate (MOSAiC) expedition, experts from 20 nations explored the Arctic for an entire year. From autumn 2019 to autumn 2020, the German research icebreaker Polarstern drifted frozen in the ice through the Amundsen Basin, Nansen Basin and Fram Strait. MOSAiC was coordinated by the Alfred Wegener Institute, Helmholtz Centre for Polar and Marine Research (AWI). The expedition was funded by the German Federal Ministry of Education and Research, and co-funded by the Swedish Polar Research Secretariat and more than 80 other institutes. The research presented in this paper was mainly funded by CINEA, European Commission.
https://mosaic-expedition.org/
https://www.awi.de/en/about-us/service/press/single-view/tiefe-einblicke-in-die-arktis-von-morgen.html

Unexpected fish and squid found in the Central Arctic Ocean 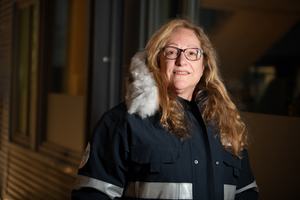 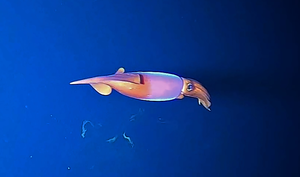