A new study from the researchers of the Department of Ethology at Eötvös Loránd University (ELTE), Hungary reveals that dogs can recognize their owner by voice alone, and they make use of some of the same voice properties as humans do. The study is published in Animal Cognition. Here is a short video about this research.

Sure, our dogs recognize us. But are they also capable of it, when neither vision nor smell is there to guide them, so by using voice alone? If so, what is it about voice, that helps them?

Dogs found their owner in 82% of the cases. To make sure that smells did not help dogs here, in the last two rounds the researchers played the owner's voice from where the stranger hid, and the dogs still went for the voice showing that they did not use their nose in this task.

The researchers also explored what exactly in the voices helped dogs to choose. “People mostly make use of three properties: pitch (higher or lower), noisiness (cleaner or harsher), and timbre (brighter or darker) to differentiate others. Dogs may make use of the same voice properties or different ones. If two voices differ in a property that matters for dogs, decisions should be easier” -- explains Anna Gábor, lead author of the study. The time dogs looked in the direction of the owner’s voice while waiting for the sign to go showed how sure they were in their decisions. It turned out that if  the owner’s and the stranger’s voice differed more in pitch and noisiness it helped dogs to recognize their owners voice, but timbre and other sound properties did not.

“This is the first demonstration that dogs can tell apart their owner’s voice from many others. The study also shows that dogs make use of some, but only some of the same voice properties as humans do to recognize who is talking” – concludes Andics Attila, leader of the Neuroethology of Communication Lab, where this study was conducted.

This study was published on the 10th of February in Animal Cognition titled “The acoustic bases of human voice identity processing in dogs”, written by Anna Gábor, Noémi Kaszás, Tamás Faragó, Paula Pérez Fraga, Melinda Lovas and Attila Andics. This research was funded by the Eötvös Loránd University, the Hungarian Academy of Sciences (Lendület programme), the European Research Council (ERC), the Eötvös Loránd Research Network, the Ministry for Innovation and Technology via the National Research, Development and Innovation Fund.

The acoustic bases of human voice identity processing in dogs

Dogs can recognize their owner by voice alone 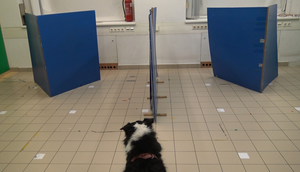