Horizon Quantum Computing, a Singapore-based company providing software development and deployment tools for quantum computing applications, is to become a node on the National Quantum-Safe Network announced by the National Research Foundation, Singapore, and the National University of Singapore (NUS). Horizon commits to supporting research and experimentation over the network that could build the foundations for a future quantum internet.

The signing of a Memorandum of Understanding (MoU) between NUS and Horizon Quantum Computing will contribute to close collaboration between academia and industry for the quantum-safe communications network. The new National Quantum-Safe Network will deploy commercial quantum-safe technologies for trials with government agencies and private companies, conduct in-depth evaluation of security systems, and develop guidelines to support companies in adopting such technologies. Initial plans for the deployment are for 10 network nodes to be installed across Singapore. The nodes will be connected to provide a public network that can act as a living lab for organisations wanting to experience quantum-safe communication technologies, and separable government and private networks trialling dedicated users' applications.

Horizon Quantum Computing will support proofs of concept and testbed activities for the development, exploration and translation efforts of this network. Moreover, the collaboration extends beyond quantum-safe communication and encompasses research collaboration opportunities in more general quantum communications and quantum internet applications.

"As a company focused on enabling users to create and deploy quantum applications, ensuring this can be done without compromising the privacy or integrity of those applications is a key concern for Horizon," says Joe Fitzsimons. "Data having to cross international borders or to be stored and processed on off-premises equipment in unencrypted form can limit commercial use cases of quantum computation. We see our collaboration with NUS and our participation in quantum communications experiments in Singapore as an important step towards developing the secure computing capabilities that will ultimately be necessary to fully unlock the potential of cloud-based quantum computing."

"Start-ups are a powerful force to deliver innovation to the world. We are glad to count Horizon Quantum Computing among our collaborators in the National Quantum-Safe Network, working towards the goal of delivering advanced cybersecurity for critical infrastructure and companies handling sensitive data," said Alexander Ling, who is an Associate Professor in NUS and Director of Singapore's Quantum Engineering Programme, from which the network initiative will receive $8.5 million over three years.

The company was founded in 2018 by Dr Joe Fitzsimons, an expert in the space of quantum computing applications. Dr Fitzsimons has over 16 years of experience in quantum computing and computational complexity theory and holds a doctorate from the University of Oxford on quantum computing architectures. The leadership team also includes Dr Si-Hui Tan, Chief Science Officer, who holds a PhD in Physics from MIT and has been actively involved in quantum research for 16 years. 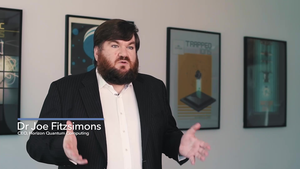