After hitting a racket or a wall, a tennis ball undergoes several rapid oscillations, flattening and elongating along the direction of motion. At the Institute of Nuclear Physics of the Polish Academy of Sciences, traces of similar oscillations occurring in 208Pb lead nuclei excited by collisions with protons have been registered by measuring gamma quanta. The only previous observation of a similar phenomenon is more than thirty years old.

In amongst the noise and disturbances of the quantum world, physicists in Cracow have tracked down a phenomenon previously observed only once, more than three decades ago. In a series of sophisticated measurements, they collected data confirming the occurrence of oscillations in nuclei of lead 208Pb atoms, consisting of flattening and elongating of the surface of the nucleus along a fixed direction. The unique experiment, described in Physical Review C, was carried out at the Bronowice Cyclotron Centre, part of the Institute of Nuclear Physics of the Polish Academy of Sciences (IFJ PAN) in Cracow.

“We are able to observe subtle oscillations of 208Pb lead nuclei using our facility due to the specific features of the Proteus C-235 accelerator we have here. The main purpose of the device is to irra­diate tumours, including eye tumours. However, one of the four lines of the accelerator was designed with physics research in mind. The uniqueness of the accelerator is due to the energy range of the protons it delivers. Throughout the world, almost all accelerators available to physicists give protons energies either significantly lower or significantly higher than ours,” explains Prof. Adam Maj (IFJ PAN).

In the Proteus cyclotron protons can reach energies of 70 to 230 megaelectronvolts (for comparison: the energy of protons in the LHC accelerator can be even hundreds of thousands of times greater). When excited by a collision with a proton, the lead nucleus can decay into secondary particles or move to a lower energy state, which is combined with the emission of a gamma-ray quantum. The two cases are fundamentally different: the energies of secondary particles can be virtually arbitrary, while the energies of the gamma quanta must correspond to the differences between the specific energy states of the nucleus. This means that it is the gamma quanta that carry the most valuable information about the structure of the atomic nucleus.

“Our international team specialises in observations of decays with emission of gamma quanta of particular excitations of nuclei, known as giant resonances,” says Dr. Maria Kmiecik (IFJ PAN), and then specifies: “So far we have studied decays of such resonances in 'hot' nuclei, i.e. those excited to high energies. However, now, thanks to an appropriate choice of experimental conditions and measurement devices, the HECTOR system of high-energy gamma-ray detectors from the University of Milan and the KRATTA matrix detector for scattered protons built in Cracow, we have managed to see decays of gamma resonances in 'cold' nuclei, i.e. those excited on ground states. What is particularly important we were also able to observe oscillations of the nucleus as a whole, being the effect of a giant quadrupole resonance”.

When a single proton of the correct energy collides with a spherical 208Pb lead nucleus in the target, it can excite that nucleus into various oscillations, especially those associated with giant resonances. Physicists use the adjective 'giant' to emphasise that resonances of this type occur much more frequently than others.

Giant resonances come in two basic varieties. In the case of a giant dipole resonance (GDR) the protons and neutrons in the nucleus oscillate with respect to each other. As a whole, the surface of the nucleus does not change shape, it only vibrates. In contrast, the quadrupole resonance (GQR) manifests itself in the form of a deformation of the entire surface of the nucleus, which starts alternately flattening and elongating along a certain direction. This phenomenon resembles the deformation of a tennis ball or golf ball, which, after bouncing off a racket or club, momentarily compresses and extends along the direction of the bounce.

Dr Barbara Wasilewska, for whom the discussed research was the topic of her PhD dissertation at the IFJ PAN, outlines the scale of difficulties: “The detection of gamma quanta emitted by excited 208Pb lead nuclei is not a simple task. In the case of a giant dipole resonance, which is much easier to induce, decay with gamma emission occurs about a hundred times less frequently than the decay by particles standardly observed. In the case of quadrupole resonance, the probability of emission of a gamma quantum decreases another hundred times, and observations are made more difficult by the fact that the phenomenon occurs on a background of its simpler cousin.”

The results obtained by physicists in Cracow using more precise apparatus are in excellent agreement with the results of the experiment from several decades ago, and at the same time they provide new, qualitatively important information. The scientists who registered the excitation and gamma-ray decay of the giant quadrupole resonance in the past conducted their measurements by bombarding lead targets with heavy ions. Insted of, the present result clearly indicates that even much lighter protons can be used to set the surface of heavy atomic nuclei into oscillations.

Although technically and theoretically demanding, the observation of vibrations related to surface deformations of lead 208Pb nuclei was carried out as a sort of a warm-up, an introduction to a long sequence of more sophisticated experiments on similar phenomena in other atomic nuclei. The team working at the cyclotron facility in Bronowice has already started their next measurements with even more improved equipment – the system for gamma quanta measurements has been replaced by a new generation of PARIS detectors. Scientists are particularly interested in resonances known as pygmy and the oscillations of atomic nuclei with non-spherical shapes, which still escape the predictions of theorists.

The research was carried out with funding from European Horizon 2020 grants (IDEAAL and ENSAR2) with the support of a grant from the Polish National Science Centre.

The Henryk Niewodniczański Institute of Nuclear Physics (IFJ PAN) is currently one of the largest research institutes of the Polish Academy of Sciences. A wide range of research carried out at IFJ PAN covers basic and applied studies, from particle physics and astrophysics, through hadron physics, high-, medium-, and low-energy nuclear physics, condensed matter physics (including materials engineering), to various applications of nuclear physics in interdisciplinary research, covering medical physics, dosimetry, radiation and environmental biology, environmental protection, and other related disciplines. The average yearly publication output of IFJ PAN includes over 600 scientific papers in high-impact international journals. Each year the Institute hosts about 20 international and national scientific conferences. One of the most important facilities of the Institute is the Cyclotron Centre Bronowice (CCB), which is an infrastructure unique in Central Europe, serving as a clinical and research centre in the field of medical and nuclear physics. In addition, IFJ PAN runs four accredited research and measurement laboratories. IFJ PAN is a member of the Marian Smoluchowski Kraków Research Consortium: "Matter-Energy-Future", which in the years 2012-2017 enjoyed the status of the Leading National Research Centre (KNOW) in physics. In 2017, the European Commission granted the Institute the HR Excellence in Research award. The Institute holds A+ category (the highest scientific category in Poland) in the field of sciences and engineering.

“y decay to the ground state from the excitations above the neutron threshold in the 208Pb(p,p'?) reaction at 85 MeV”

At the Institute of Nuclear Physics of the Polish Academy of Sciences, vibrations of the 208Pb lead nuclei were observed, similar to the deformations appearing in a tennis ball just after bouncing off a wall. (Source: IFJ PAN/San Diego State University/Matt Anderson)

Interior of the vacuum chamber for observations of the lead nuclei oscillations. A target made of lead 208Pb is placed in the middle between two cylindrical gamma radiation detectors. A proton beam from the PROTEUS cyclotron, coming from the lower left corner, hits the target. Scattered proton detectors are visible in the upper right corner. (Source: IFJ PAN)

Relationship between the number of gamma photons emitted by the lead 208Pb excited by protons and the energy of these photons. The existence of oscillations caused by the giant quadrupole resonance is evidenced by the area marked in red (the green area is associated with the giant dipole resonance). (Source: IFJ PAN)

y decay to the ground state from the excitations above the neutron threshold in the 208Pb(p,p'?) reaction at 85 MeV 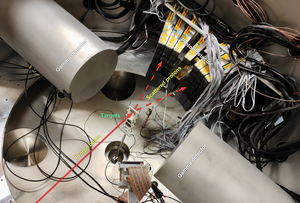 Interior of the vacuum chamber for observations of the lead nuclei oscillations, annotated. 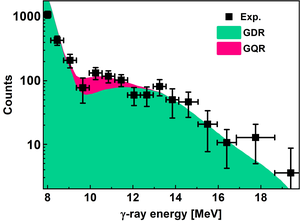 Relationship between gamma photons emitted by lead 208Pb excited by protons and the energy of these photons.