Switzerland is to become climate neutral by 2050, according to a resolution passed by the Federal Council in August 2019, which was adopted as a long-term climate strategy by the Federal Council in January 2021. But what does that mean in practice? How can these goals be achieved, what will it take and what will it cost? Andras Züttel, head of the LMER in Sion, a joint research center of Empa and EPFL, together with former Empa director Louis Schlapbach, has now made a detailed calculation and published it in the journal Frontiers in Energy Research.

The researchers calculated three different energy systems and compared them with today's energy costs of around 3000 Swiss francs per capita and year. The first challenge is to replace Switzerland's nuclear power plants, which are scheduled to be shut down by 2050. This alone requires a solar roof area of 16 square meters per capita of the Swiss population. For each inhabitant, a storage battery of 9 kWh is needed to store the electricity harvested during the day into the night. In addition, four large pumped storage power plants the size of the Grande Dixence power plant are needed to store the summer electricity into the winter. This basic assumption applies to every scenario.

It is most efficient to electrify the entire energy supply, Züttel says. If all cars and trucks are electric and all buildings are heated with heat pumps, the amount of electricity that would be needed would increase by just under 1,000 watts per capita - on top of today's electrical energy consumption. To generate this amount of energy, Switzerland would need 48 square meters of solar surface per capita (three times the available roof area of Switzerland), an additional 26 kWh storage battery per capita, and for summer-winter storage an additional 13 pumped-storage power plants with 1500 GWh each – which resembles the size of the Grand Dixence power plant. Energy researcher Züttel calculates: "If we start immediately, we would have to build a new dam every year until 2035. But we simply don't have enough suitable valleys in the country for such a scale."

The second option would be a hydrogen economy. But climate-neutral hydrogen is produced from solar electricity, and some of the energy is lost in the conversion process. Scenario number 2 would require 116 square meters of solar space per capita - and a day-night storage battery of 57 kWh per capita. Hydrogen could then be used to power cars, trucks and buses, and catalytic burners could be used to heat all buildings. Additional reservoirs would not be needed for this variant, but the hydrogen produced in summer would have to be stored at 200 bar pressure in underground caverns. Züttel calculates, "We need a volume of 57 million cubic meters - that's about 25 times the Gotthard Base Tunnel." The energy costs for this variant would increase by about 50 percent, i.e., from today's 3000 francs per capita to about 4400 francs per capita per year.

12 times the roof area of Switzerland

Option three is to supply the entire country with synthetic fuels (synfuels) from green electricity. Homeowners would continue to operate their oil and gas heating systems; car owners would continue to fill up with diesel, gasoline or gas. Even kerosene for airplanes is included in this calculation (in scenarios 1 and 2, 33 square meters of additional solar area per capita would be required for aviation fuel!)

New reservoirs or underground hydrogen caverns would not be necessary here. But for this scenario, 4.5 percent of Switzerland's national territory would have to be covered with solar cells - that's 12 times more than the roof area available today. A storage battery of 109 kWh per capita would also be needed to store the massive amount of solar power at midday and make it available to the chemical industry, which would use it to produce first hydrogen and then synfuels. The cost of energy would more than triple - from 3000 francs per capita today to 9600 francs per capita per year.

Züttel points out that not just any energy price is economically viable. "Since the beginning of the industrial age a good 200 years ago, the economic performance of every country has been linked to the availability of energy. But to create an economic benefit, primary energy must not cost more than 40 centimes per kWh, otherwise industry will operate at a loss," says the researcher. "So we have to get away from the idea that we can meet all our energy needs with domestically produced, renewable energy."

Züttel recommends taking a global view: In places like the Sahara or Australia, he says, solar radiation is so high that synfuels can be produced by a third cheaper. "We can't do without global energy logistics in the future."

What will a CO2-neutral Switzerland cost us? 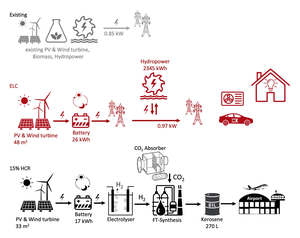 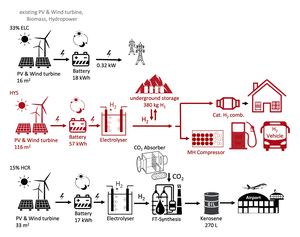 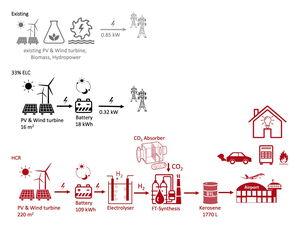