Semiconducting devices harness the power of light to produce other types of energy: electrical or chemical. One application of this technology is producing hydrogen molecules from water—in a process known as photoelectrochemical (PEC) water splitting—as a renewable source of energy.

Photoelectrolytic cells include semiconductor electrodes, in which hole and electron get spatially separated when irradiated with light with the energy higher than certain threshold. The flow of charge initiates the PEC reactions. Nanotubes of titanium dioxide (TiO2) are semiconductors that are widely used for this purpose. However, the distribution of charge flow on the surface of TiO2 tubes is not clear. Now, Marina Makarova at Kanazawa University and colleagues in Japan and Europe, have used an innovative technique called scanning electrochemical cell microscopy (SECCM) to identify this distribution.

To first measure the success of PEC water splitting, the release of oxygen (the reaction product accompanying hydrogen) was measured. Its production was additionally characterized by lead (II) ions added to the cell, so lead (IV) oxide (PbO2) particles were found deposited on the walls and top of the TiO2 nanotubes suggesting similar electrochemical reactivity at both of these sites. The research team then employed SECCM to clarify the photoreactivity on both sites at different electrode potentials.

SECCM involves the use of a narrow pointed pipette probe to measure electrical changes at specific locations. This probe is filled with a conducting fluid known as an electrolyte which is located between two charged electrodes. One electrode is immersed into the electrolyte, while the second is connected to the sample surface. Measurements were taken perpendicular to and parallel to the length of the tubes to determine differences in reactivity on the walls and the top, respectively. Now, the free electrons typically move along the length of nanotubes towards the positive electrode within the cell. When these electrons delocalize and jump to conducting band, they leave behind "holes" which are nothing but pockets of positive charge that can move about. The SECCM results showed the presence of similar electrical activity along the walls and the top of the nanotubes. Since activity at the top could be preferentially attributed to the movement of electrons, this suggested that holes were instead traversing shorter distances and moved perpendicular to the tube length towards the walls. This flow along a direction orthogonal to the tube length explained why PbO2 depositions were also found on the walls of the tubes.

"This information could be used to establish further correlations between the photocurrent and the microstructure of 1D nanostructures, and for site-specific decoration with co-catalysts or visible-light-responsive sensitizers," say the team. Understanding spatial patterns of electrochemical activity is important to design efficient and cost–effective photovoltaic cells. Furthermore, a combination of oxide deposition and SECCM might be the most sensitive tool in identifying active sites.

Hydrogen is increasingly becoming a cleaner and more sustainable source of energy. One method of obtaining it is the PEC splitting of water to produce hydrogen and oxygen molecules. This reaction can also be conducted industrially using a photovoltaic system coupled to an electrolyzer. The PEC cell uses light to produce high-energy electrons and uses these electrons to initiate the chemical reaction that breaks up water molecules. Since semiconductors are the primary source of electrons in photoelectrolytic cells, understanding their PEC properties is vital to designing optimal systems.

SECCM is a novel imaging technique that enables the simultaneous electrochemical and topographical imaging of surfaces. A nanoscale glass pipette is filled with a electrolyte solution. The pipette is connected to a set of electrodes that enable a flow of ion current through this electrolyte. Due to the fine nature of this pipette, contact can be maintained at the pipette end between the electrolyte inside and a very precise area of a surface. Surfaces with inherent electric activity such as semiconductors then support photoelectrochemical reaction upon interaction with the electrolyte. Since SECCM is a very sensitive technique it captures even minute differences in activity between neighboring surfaces. Thus, SECCM was used to determine any potential differences in activity between the top and walls of TiO2 tubes. 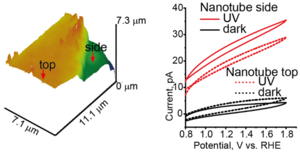