The asteroid which killed nearly all of the dinosaurs struck Earth during springtime. This conclusion was drawn by an international team of researchers after having examined thin sections, high-resolution synchrotron X-ray scans, and carbon isotope records of the bones of fishes that died less than 60 minutes after the asteroid impacted. The team presents its findings in the journal Nature.

The researchers from Uppsala University in Sweden, Vrije Universiteit (VU) in Amsterdam, Vrije Universiteit in Brussels (VUB), and the European Synchrotron Radiation Facility (ESRF) in France turned to the unique Tanis locality in North Dakota (United States) to find fossilised paddlefishes and sturgeons which were direct casualties of the so-called Chicxulub meteorite impact that also marked the last day of the dinosaurs. The impact rocked the continental plate and caused massive standing waves in water bodies. These mobilised enormous volumes of sediment that engulfed fishes and buried them alive while impact spherules rained down from the sky, less than an hour after impact.

Fossil fishes in the Tanis event deposit were pristinely preserved, with their bones showing almost no signs of geochemical alteration. The synchrotron X-ray data, which are made available for anyone to explore, confirms that filtered-out impact spherules are still stuck in their gills. Even soft tissues have been preserved!

Selected fish bones were studied for the reconstruction of latest Cretaceous seasonality. “These bones registered seasonal growth very much like trees do” says Sophie Sanchez of Uppsala University and the ESRF.

”The retrieved growth rings not only captured the life histories of the fishes but also recorded the latest Cretaceous seasonality and thus the season in which the catastrophic extinction occurred,” states senior author Jeroen van der Lubbe of the VU in Amsterdam.

An additional line of evidence was provided by the distribution, shapes and sizes of the bone cells, which are known to fluctuate with the seasons as well. “In all studied fishes, bone cell density and volumes can be traced over multiple years. These were on the rise but had not yet peaked during the year of death,” says Dennis Voeten of Uppsala University.

One of the studied paddlefishes was subjected to stable carbon isotope analysis to reveal its annual feeding pattern. The availability of zooplankton, its prey of choice, oscillated seasonally and peaked between spring and summer.

“This temporary increase of ingested zooplankton enriched the skeleton of its predator with the heavier 13C carbon isotope relative to the lighter 12C carbon isotope,” explains Suzan Verdegaal-Warmerdam of the VU Amsterdam. “The carbon isotope signal across the growth record of this unfortunate paddlefish confirms that the feeding season had not yet climaxed – death came in spring,” infers Melanie During from Uppsala University and the VU Amsterdam and lead author of the publication.

The end-Cretaceous mass extinction represents one of the most selective extinctions in the history of life that saw the demise of all non-avian dinosaurs, pterosaurs, ammonites, and most marine reptiles, while mammals, birds, crocodiles, and turtles survived. Because we now know that the extinction must have abruptly started during northern-hemisphere spring, we start to understand that this event took place during particularly sensitive life stages of Latest Cretaceous organisms, including the onset of reproduction cycles. And because southern-hemisphere autumn coincides with spring in the Northern Hemisphere, the preparation for winter may have just protected organisms in the Southern Hemisphere.

“This crucial finding will help to uncover why most of the dinosaurs died out while birds and early mammals managed to evade extinction,” concludes Melanie During.

The Mesozoic terminated in boreal spring

The last day of the dinosaurs 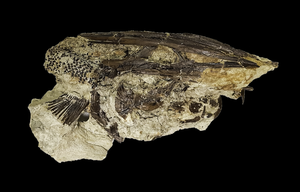 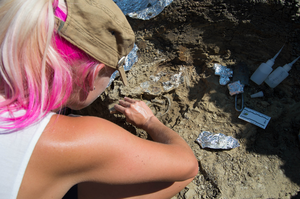 Excavating in the Tanis