The asteroid that killed nearly all dinosaurs struck Earth during springtime. An international team of scientists from the Vrije Universiteit (VU) Amsterdam (The Netherlands), Uppsala University (Sweden), Vrije Universiteit Brussel (Belgium) and the ESRF, the European Synchrotron (France), have determined when the meteorite crashed onto the Earth, after analysing the remains of fishes that died just after the impact. Their results are published in the journal Nature today.

Around 66 million years ago, the so-called Chicxulub meteorite crashed into the Earth, in what today is the Yucatán peninsula in Mexico, marking the demise of dinosaurs and end of the Cretaceous period. This mass extinction still puzzles scientists today, as it was one of the most selective in the history of life: all non-avian dinosaurs, pterosaurs, ammonites, and most marine reptiles disappeared, whilst mammals, birds, crocodiles, and turtles survived.

A team of scientists from the Vrije Universiteit, Uppsala University, and the ESRF have now shed light on the circumstances surrounding the diverse extinction across the different groups. The answers came from the bones of fishes that died moments after the meteorite struck.

When the meteorite impacted Earth, it rocked the continental plate and caused huge waves in water bodies, such as rivers and lakes. These moved enormous volumes of sediment that engulfed fish and buried them alive, while impact spherules (glass beads of Earth rock) rained down from the sky, less than an hour after impact. Today, the event deposit of Tanis in North Dakota (United States) preserves a fossilised ecosystem that includes paddlefishes and sturgeons, which were direct casualties of the event.

The fossil fishes were exceptionally preserved, with their bones showing almost no signs of geochemical alteration. Melanie During, researcher from Uppsala University and the VU Amsterdam and lead author of the publication, went onsite to excavate the precious specimens: “It was obvious to us that we needed to analyse these bones to get valuable information about the moment of the impact”, she explains.

The team came to the ESRF, a particle accelerator that produces the world’s brightest x-rays, with a partial fish specimen and representative sections of the bones and carried out high-resolution synchrotron X-ray tomography.

The ESRF is the perfect tool to research this kind of samples and the facility has developed unique expertise in palaeontology over the last two decades. “Thanks to the ESRF’s data, we found that the bones registered seasonal growth, very much like trees do, growing a new layer every year on the outside of the bone”, explains Sophie Sanchez of Uppsala University, and visiting scientist at the ESRF.

”The retrieved growth rings not only captured the life histories of the fishes but also recorded the latest Cretaceous seasonality and thus the season in which the catastrophic extinction occurred”, states senior author Jeroen van der Lubbe of the VU in Amsterdam.

The X-ray scans also showed the distribution, shapes, and sizes of the bone cells, which are known to fluctuate with the seasons as well. “In all studied fishes, bone cell density and volumes can be traced over multiple years and they indicate whether it was spring, summer, autumn, or winter. We saw that both cell density and volumes were on the rise but had not yet peaked during the year of death, which implies that growth abruptly stopped spring” says Dennis Voeten, researcher at Uppsala University.

In parallel to synchrotron radiation studies, the team carried out carbon isotope analysis to reveal the annual feeding pattern of a fish. The availability of zooplankton, its prey of choice, oscillated seasonally and peaked in summer. This temporary increase of ingested zooplankton enriched the skeleton of the fish with the heavier 13C carbon isotope relative to the lighter 12C carbon isotope. “The carbon isotope signal across the growth record of this unfortunate paddlefish confirms that the feeding season had not yet climaxed – death came in spring,” asserts During.

The findings will aid future research into the selectivity of the mass extinction: in the Northern Hemisphere, it was spring and therefore the reproduction cycles of organisms were starting, only to be abruptly stopped. Meanwhile, it was autumn in the Southern Hemisphere, where many organisms were likely preparing for winter. In general, it is well understood that organisms who were exposed died virtually immediately. So those sheltering in caves or burrows because they were hibernating were far more likely to survive into the Paleogene. “Our results will help to uncover why most of the dinosaurs died out while birds and early mammals managed to evade extinction,” concludes During.

The Mesozoic terminated in boreal spring 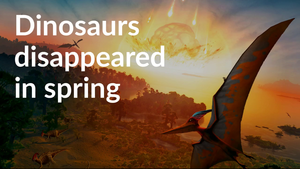 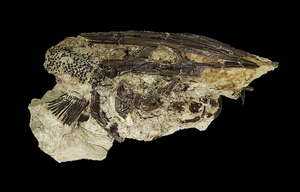