This study is led by Dr. Zhiyong Xiao (Planetary Environmental and Astrobiological Research Laboratory, School of Atmospheric Sciences, Sun Yat-sen University), who is a core scientific team member of the first in-situ lunar mission to the Moon, Chang’E-4. The team examined images taken by the panorama camera onboard the Yutu-2 rover, and discovered several translucent spherical and dumbbell-shaped glassy globules (see images below). Perching on the surface regolith, the globules are transparent to translucent, and they exhibit a light brownish color. Such centimeter-sized translucent glass globules was not found on the Moon before. “The globules simply blow our mind, since they are so unique on the Moon,” Xiao says.

Xiao has been studying tektite and microtektites, special distal impact glasses formed by terrestrial impact events, and microscopic glass spherules on the Moon, but they did not expect to see such translucent glass globules at the Chang’E-4 landing region. Centimeter-sized glassy globules have been collected by Apollo astronauts, but they are mostly dark, opaque, and clast-rich (see image below). The largest holohyaline globules found on the Moon are less than 1 cm, such as a globule recently collected by the Chang’E-5 mission, and they are also opaque (see image below). Along the less than 700 meters route of Yutu-2 that was accomplished in its first 12 lunar days, at least two such globules were confirmed, and another two possible cases were awaited to be confirmed due to inadequate image resolution. Based on the color, morphology, geometry, and possible exposure ages, the team studied the origin of the globules by referring to critical cooling rates of crystallization for various lunar rocks.

The team found that the globules are well consistent with being impact glasses sourced from iron-poor materials, such as pure anorthosites that are composed of plagioclase. Within a ballistic range permitted by the maximum landing velocity of the globules, the team reveal that a lot potential parent craters are capable to form such globules, as the target lithology there consists of pure anorthosites, and high-energy melt is a common product in typical lunar impact events. “It is a bit unfortunate that when we first found these glasses, the rover has just passed by them, and no compositional data were obtained, but such globules might be pretty common at the lunar farside” Xiao says.

“The first discovery of macro-sized translucent glass globules on the Moon confirms that lunar anorthosites are excellent raw materials to manufacture glasses with good light-admitting quality. Their existence on the Moon indicate that impact events on the other planetary bodies could also form tektite-like impact glasses. Such glass globules should be commonly produced by ancient impact basins on the Moon, so their compositions and isotopic ages will be highly valuable to understand the early impact history. Also, at the dawn of constructing human-bases to the Moon, lunar anorthosites are a promising and widespread resources to produce glasses in-situ,” Xiao says.

Without compositional data (e.g., 10Be), the possibility that these glass globules are counterparts of terrestrial tektites is currently unknown. Rather, tektites on Earth were produced by larger than ~10 km diameter craters that were formed in water-rich target. Apollo astronauts have reported easy recognition when collecting centimeter-sized glassy globules on the Moon, so the translucent glass globules are value sampling target for future lunar surface explorations.

Translucent glass globules on the Moon 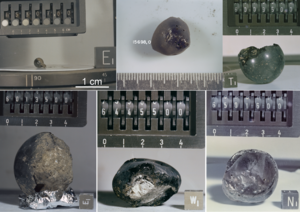 Holohyaline globules collected by the Apollo 14 and Chang’E-5 missions.