Mollusk shells at 4,000-year-old Native American shell ring villages indicate that environmental change may have driven the formation and abandonment of these coastal communities, according to a study by Carey Garland and Victor Thompson in the open-access journal PLOS ONE on March 2, 2022.

Shell ring villages were coastal communities built around fishing, as indicated by their sitting next to shellfish estuaries, and their large mounds of mollusk shells which remain to this day. Shell rings formed some of the earliest human village settlements along the U.S. South Atlantic coast but were abandoned at the end of the Late Archaic around 4,000 years ago. While scholars have proposed socio-ecological explanations, there has been limited examination of the physical evidence for these.

Garland, Thompson and colleagues analyzed the biochemistry and paleobiology of mollusk shells found at three abandoned shell rings on Sapelo Island in Georgia, U.S. For example, they measured the size of oyster shells as an indicator of the health of the environment and compared oxygen isotope values to determine salinity conditions. They integrated their findings with chronological data – such as tree ring analyses - using a Bayesian chronological model, to determine environmental fluctuations over time.

The researchers found that the three Sapelo shell rings, known as Ring I, Ring II and Ring III, were occupied in the Late Archaic for varying, sometimes overlapping, periods. Ring II appeared to be the oldest and longest-lasting, founded around 4290 years ago and being occupied until 3950 years ago, with Ring I lasting around 150 years in the middle of this period. Ring III was the newest and outlasted the others, before abandonment around 3845 years ago. While Rings I and II featured large oyster shells, those at Ring III were significantly smaller, indicating a decrease in oyster shell size over time. Smaller oysters tend to be less healthy or younger, so this may indicate a depletion in oyster stocks and/or oyster health. Oxygen isotopes also indicated significantly lower salinity conditions by the time of Ring III as compared to Rings I and II.

The analysis suggests that the inhabitants of the shell ring villages experienced environmental fluctuations, especially around the occupation of Ring III. Coastal settlement may have initially been an adaptation to climate change as a way to effectively manage fisheries - which are highly sensitive to such changes. However, by the time of occupation of Ring III, fishing may have become unsustainable, leading to dispersals to other settlements and other forms of subsistence.

The authors believe that their work provides “comprehensive evidence for correlations between large-scale environmental change and societal transformations on the Georgia coast during the Late Archaic period”.

The authors add: “The emergence of village life and adaptation to coastal environments are significant transitions in human history that have occurred at various times and places across the globe. Our research shows that Indigenous peoples who established North America’s first coastal shell ring villages some 4200 years ago were resilient and, through cooperation and collective action, were able to adapt to environmental instability and resource shortfalls.” 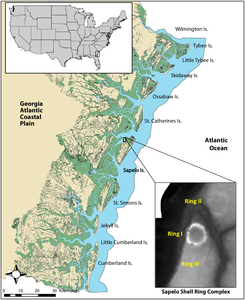