A joint research team at the Medical University of South Carolina (MUSC) and the University of Florida describes the first non-invasive and near real-time visualization of the human brain’s waste-clearance system in Nature Communications. The brain is densely organized, and visualizing the structures dedicated to waste removal, also known as lymphatic structures, had been a limitation in the field.

“This is the first report to show the complete human brain lymphatic system architecture in living humans,” said Onder Albayram, Ph.D., an assistant professor in the Department of Pathology and Laboratory Medicine and Department of Neuroscience at MUSC, who led the research team and is senior author of the article.

Albayram was intrigued by the possibility of lymphatic structures in the brain. “The lymphatic clearance system is all over the body for different organs,” he said. “I asked myself simply, ‘Why not the brain?’”

Improved visualization of the brain’s waste-clearance system could enhance our understanding of how the healthy brain functions. It could also provide insight into what goes wrong in neurogenerative diseases such as Alzheimer’s and how the brain recovers from traumatic brain injuries (TBIs).

Pound for pound, the brain is the most metabolically demanding mass in the body – weighing around 3 pounds but requiring 20% of total oxygen consumption. That metabolic demand comes with the need to dispose of waste regularly.

As blood carrying oxygen permeates tissues to deliver vital nutrients, it collects pathogens, damaged cells and waste. This fluid then drains into lymphatic vessels to be filtered through lymph nodes, which dispose of any unwanted waste products.

“It had long been believed that the brain lacked lymphatic vessels,” said Sait Albayram, M.D., a professor in the Department of Neuroradiology at the University of Florida, who is the lead author of the article.

“That thinking began to change about a decade ago, as the first reports from experiments in rodents hinted at lymphatic vessels surrounding the brain, side by side with blood vessels. But evidence of lymphatic vessels in human brains remained scarce before this study.”

Onder Albayram likens the brain in the skull to an apple suspended inside of a jar. Coating the inside of the “jar,” or skull, is a layer of delicate membranes known as the meninges. A liquid known as cerebrospinal fluid (CSF) surrounds the brain. The conventional thinking was that waste-laden fluid from the brain flowed out into the CSF along blood vessels, was transported out of the skull and then drained into veins. Research over the past decade has hinted instead that the process is more complex and suggested the existence of dedicated waste-removing lymphatic vessels in the brain.

However, witnessing these vessels in action in a living human brain has posed technical limitations.  Chief among them is the required use of the toxic rare-earth metal, Gadolinium, a toxic rare-earth metal used as a contrast agent during MRI, a technique used to visualize and differentiate structures in the brain.

“The discovery of the meningeal lymphatic networks in mammals in the last decade opened a new chapter in our understanding of cellular waste management in the brain,” said Adviye Ergul, M.D., Ph.D., a professor in the Department of Pathology and Laboratory Medicine at MUSC, who was not an author of the study.

“This novel study takes it one step further by eliminating the need to inject contrast agents to visualize the lymphatic vessels,” she said. “This is a major accomplishment that will invigorate the field to go deeper into the brain and expand our knowledge of the brain lymphatic system.”

This simple yet innovative approach enabled investigators to capture clear images of lymphatic vessels, with their high protein content – about 50-fold greater than that of CSF – as they connected areas within the brain to lymph nodes in the neck.

The research team then went on to compare how aged brains differ from younger ones, finding a reduction in waste clearance in older brains.

Using this non-invasive MRI technique, researchers and physicians can now actually see what the lymphatic vessels of a healthy brain look like, said Onder Albayram, and study how they change as we age. They can also determine their role in the progression of neurodegenerative diseases, such as Alzheimer’s and related dementia.  The technique could also be used to study ways to increase the brain’s lymphatic output as we age and perhaps offer insight into recovery after TBI.

“Imagine again the brain in the jar, surrounded by delicate lymphatic vessels,” said Onder Albayram. “What happens during a TBI? Are the lymphatic vessels damaged, and how do they recover? This technique will enable us to begin to answer these questions.”

Founded in 1824 in Charleston, MUSC is home to the oldest medical school in the South as well as the state’s only integrated academic health sciences center, with a unique charge to serve the state through education, research and patient care. Each year, MUSC educates and trains more than 3,000 students and nearly 800 residents in six colleges: Dental Medicine, Graduate Studies, Health Professions, Medicine, Nursing and Pharmacy. MUSC brought in more than $327.6 million in biomedical research funds in fiscal year 2021, continuing to lead the state in obtaining federal and National Institutes of Health funding, with more than $220 million. For information on academic programs, visit musc.edu.

As the clinical health system of the Medical University of South Carolina, MUSC Health is dedicated to delivering the highest-quality and safest patient care available while training generations of compassionate, competent health care providers to serve the people of South Carolina and beyond. Patient care is provided at 14 hospitals with approximately 2,500 beds and five additional hospital locations in development, more than 300 telehealth sites and nearly 750 care locations situated in the Lowcountry, Midlands, Pee Dee and Upstate regions of South Carolina. In 2021, for the seventh consecutive year, U.S. News & World Report named MUSC Health the No. 1 hospital in South Carolina. To learn more about clinical patient services, visit muschealth.org.

A first glimpse of the human brain’s drains 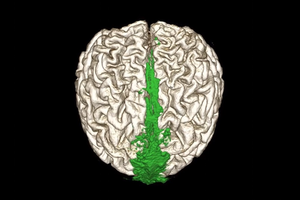