In Corsica, away from the eyes of locals and tourists, hides a population of unprecedented proportions of a rare and protected orchid: the neglected Serapias (Serapias neglecta). In a closed military base in the east of the island, researchers discovered 155,000 individuals of the plant.

Globally, this orchid can only be found in the south of France (including Corsica), Italy, and along the east coast of the Adriatic, but none of its known populations has been as abundant as the one documented in Solenzara.

Margaux Julien, Dr Bertrand Schatz, Simon Contant, and Gérard Filippi, researchers from the Center of Functional Ecology and Evolution (CEFE) and Ecotonia consultancy,came across this population while studying plant diversity in the Solenzara air base. Their research, published in Biodiversity Data Journal, documented impressive plant richness, including 12 other orchid species.

The maintenance of the closed military area turned out to be really favourable to the development of orchids. The flower was abundant around the edges of runways and on lawns near military buildings.

“Мilitary bases are important areas for biodiversity because they are closed to the public, are not heavily impacted and these areas have soils that are often poorly fertilised and untreated due to old installations, so they often have high biodiversity,” the researchers say in their study.

The meadows around the airport are regularly mowed for security reasons, which allows orchids to thrive in a low vegetation environment with little competition. In addition, the history of the land with its position on the old Travo river bed favours low vegetation, providing rocky ground just a few centimetres beneath the soil.

“The case of S. neglecta is particularly remarkable, because this species benefits from a national protection status and it is a sub-endemic species with a very localised distribution worldwide,” the research team writes. Moreover, the species is classified as near threatened in the World and European Red Lists of the International Union for Conservation of Nature.

The Ecotonia consultancy also did several inventories on the air base, finding biodiversity of rare richness: 552 species of plants, including 19 with protected status in France. Within only 550 ha, they found 23% of the plant species distributed in Corsica. Among these are some very rare plants, as well as endangered species such as the gratiole (Gratiola officinalis) and Anthemis arvensis subsp. incrassate, a subspecies of the corn chamomile.

The Solenzara military base hides rich floristic diversity thanks to its history, management, and the lack of public access. While the Corsican coastline is suffering from urbanisation, this sector is a testament to the local flora, featuring several species with conservation status.

The protection of this richness is crucial. “If logistical developments are carried out on this base, they will have to favour the conservation of this exceptional floristic biodiversity, and, in particular of this particularly abundant orchid. Military bases are a great opportunity for the conservation of species and would benefit from enhancing their natural heritage,” the researchers conclude.

Flora richness of a military area: discovery of a remarkable station of Serapias neglecta in Corsica

The largest population of a rare, protected orchid found in a military base in Corsica 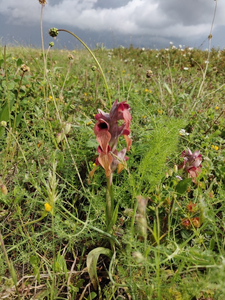 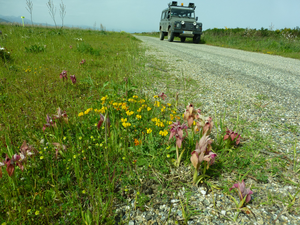