Intestinal cells can change specializations during their lives. The BMP signaling pathway – an important communication mechanism between cells – appears to be the driver of these changes. That is wat scientists from the groups of Hans Clevers (Hubrecht Instituut) and Ye-Guang Chen (Tshinghua University, Beijing) have concluded after research with organoids and mice. The study will be published in Cell Reports on 1 March 2022 and offers new insights into potential targets for the treatment of metabolic diseases.

The intestinal wall is made up of different types of cells. Some are for instance responsible for the uptake of nutrients, while others produce hormones. It was long thought that after their formation, intestinal cells specialize in one function that they continuously perform until they die. However, recent studies show that these cells can change specializations. Researchers from the groups of Hans Clevers and Ye-Guang Chen (Tsinghua University, Beijing) now discovered that these changes are driven by the BMP signaling pathway.

The BMP signaling pathway is one of many signaling pathways in the body. Such pathways form lines of communications between cells: with the production of a protein by one cell, it gives a signal to the next cell, which in turn produces proteins. Eventually, this whole cascade of protein production triggers certain processes – for example processes that are important during embryonic development. Joep Beumer, one of the researchers on the project, explains: “We knew that BMP signaling plays an important role in the initial specialization of intestinal cells. What we now discovered, is that it is also the driver of changes in the specializations of these cells over their lifetimes.

Intestinal cells arise from stem cells that lie in indentations (i.e. the crypts) of the intestinal wall. These intestinal cells then migrate up the intestinal villi. During their migration, they perform a certain function, for example the absorption of nutrients or the production of hormones. Once they reach the top of the villi, they die. “The function of intestinal cells changes during their migration along the villi. They for example produce antimicrobial components in the lower parts of the villi (at the start), while they are involved in absorbing fats later on in their journey,” says Beumer. This gradual change in the function of the cells is called zonation. “At the same time, the BMP signaling pathway is not very active in the crypts and in the lower parts of the villi, while it becomes more and more active higher up in the villi.

The scientists at the Clevers lab used intestinal organoids for their research. These are tiny 3D structures that can be grown in the lab and that mimic the function of the gut. In these miniature guts, the researchers were able to mimic conditions of low or high BMP signaling, similar to the altering environment along the intestinal villi. Using ‘Single cell RNA sequencing’, a technique that makes it possible to see which genes are active and which ones are not, they made a surprising discovery. Jens Puschhof explains: “When BMP was active in the organoids, the cells in these miniature guts were identical to the cells located in the top of the villi, while inactivation of BMP made the cells in the organoids resemble the cells located in the lower parts of the villi. In other words, zonation turned out to be dependent on the BMP signaling pathway.”

The results found in organoids had to be confirmed in living organisms. Colleagues from the group of Ye-Guang Chen used a mouse model in which BMP signaling could be turned off in the gut. In mice with an inactive BMP signaling pathway in the gut, intestinal cells no longer changed specializations during their migration from the crypts to the villi. “That confirmed our conclusion: BMP signaling is the driver behind zonation of intestinal cells,” says Beumer.

The study, to be published in Cell Reports, has important implications for the use of organoids for research. “Normally, researchers inhibit BMP signaling in organoids,” says Fjodor Yousef Yengej. “Although this proved beneficial for growth, not all functions of the gut are represented in these cultures.” Activation of BMP signaling may be required for research into certain topics, such as fat absorption.

In addition to providing these new fundamental insights into the functions of intestinal cells during their lives, the study may ultimately contribute to the development of new treatments for metabolic diseases. “In certain metabolic diseases, there is an accumulation of fat in parts of the body such as the liver, or an imbalance in gut hormones. We now know that active BMP signaling stimulates fat absorption, so if we can inhibit signaling in these patients, we can also influence fat absorption,” Beumer concludes. BMP inhibitors targeting the gut are yet to be developed, but would have broad beneficial effects on metabolism.

Hans Clevers is group leader at the Hubrecht Institute for Developmental Biology and Stem Cell Research and at the Princess Máxima Center for Pediatric Oncology. He is also University Professor at the Utrecht University and Oncode Investigator. 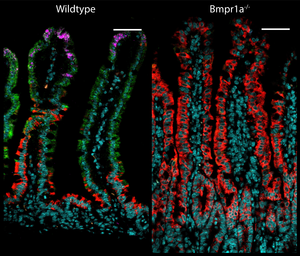 Zonation in the intestine