Ambatovy mine, a major contributor to Madagascar’s economy and a company which positioned itself as a leader in sustainable mining, is on track to deliver ‘No Net Loss’ of the unique forest habitat destroyed by the mine.

Increasingly infrastructure projects are required to deliver ‘No Net Loss’ in biodiversity; often using a controversial approach known as biodiversity offsetting. Despite the proliferation of such schemes, there are vanishingly few independent evaluations. New research led by Bangor University and published in Nature Sustainability, is one of the first fully independent, and most robust, impact evaluations of a biodiversity offset conducted to date. The study, focused on a high-profile mine in Madagascar, suggests that the offsets are on track to deliver ‘No Net Loss’ of the unique forest habitat destroyed by the mine.

“Ambatovy aims to conserve forest, by slowing deforestation driven by small-scale agriculture elsewhere, to offset the forest they have cleared at the mine site,” describes Katie Devenish (PhD student at Bangor University and lead author of the study). “Our analysis suggests that they have already saved nearly as much forest as was lost at the mine site. We estimate that No Net Loss of forest was achieved by the end of 2021.”

Professor Julia Jones from Bangor University adds: “Low-income countries like Madagascar desperately need the economic development which commercial mining can bring. There are many important caveats to our findings, but it is certainly encouraging that Ambatovy’s economic contributions to Madagascar (tens of millions of dollars a year), seem to have been made whilst minimising trade-offs with the island’s precious remaining forest habitat.”

The research uses state-of-the-art approaches to evaluate the impact of the mine’s strategy to achieve ‘No Net Loss’ of forests as Dr Sébastien Desbureaux, from the Centre for Environmental Economics – Montpellier, explains: “Robust evaluations of biodiversity offsets are very rare. There are over 12,000 biodiversity offsets worldwide, and less than 0.05% have been evaluated. Evaluations are hard to do as they involve comparing observed outcomes to what would have happened without the intervention. This counterfactual scenario is obviously difficult to estimate. We explored more than 100 alternative ways of running our analysis and the results are clear.”

Professor Simon Willcock, from Rothamsted Research & Bangor University, explains why the analysis has limitations: “Whilst we can confidently show that the deforestation associated with the mine has likely been compensated for, we cannot capture impacts on species. It is also important to note that there may have been a cost to local people of the improved forest protection. We must also consider what happens when the company pulls out of the area (expected between 2040 and 2050) as without ongoing protection and restoration of the mine site, which is a very difficult task, Ambatovy’s claims to No Net Loss might be threatened.”

Professor Jones adds: “Despite global commitments, tropical forests continue to disappear rapidly. Biodiversity offsetting of the type studied in this research cannot resolve this. In fact, the approach only makes sense if there is ongoing deforestation in the wider landscape, which sadly is the case. However, given this ongoing destruction, this result lends strong support to requirements that mines, and other major developments, should do their bit by investing in conservation efforts. This case study shows that it can pay off.”

Professor Simon Willcock concludes: “Global infrastructure development is not set to slow anytime soon. Finding policies to effectively reconcile such development with the need to conserve habitats and species is vital to avoid further exacerbating the ecological and climate emergency. It is all very well to introduce policies aiming to avoid biodiversity impacts from development but we need to look critically at whether or not they are delivering.”

J.P.G.J. co-authored a paper that was quite critical of the social impact of Ambatovy’s biodiversity offsets in 2017. She was later approached by the new leadership of Ambatovy who asked if she could return to villages visited in that research to explore the current situation. She collected independent information from a number of villages around CZ, TTF and CFAM biodiversity offsets and fed this back to the mine. This work was funded by an Economic and Social Research Council Impact Accelerator Award to J.P.G.J. She has never received any funding from Ambatovy. The other authors declare no competing interests. 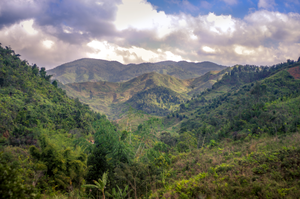 Forests around the Ambatovy mine