A team of researchers at Tohoku University have developed a simple lab-based system for growing human muscle cells that are capable of vigorously contracting. The team used the model, which was described in the journal Scientific Reports, to investigate the properties of muscle cells from patients with sporadic inclusion body mitosis (sIBM).

sIBM is a degenerative disease that causes muscles to get progressively weaker. It typically affects patients aged over 50, predominantly impacting muscles in the fingers and knees. Observing how muscle cells from sIBM patients work during exercise is crucial to understanding more about this disease.

This can be achieved using ‘in vitro exercise models,’ which involve growing elongated muscle cells called myotubes in a petri dish and applying electrical pulses to them to simulate the effects of muscle contraction. However, these widely used models are limited; the human myotubes do not contract very well because they are flat in shape and attach firmly to the material they are grown on. In comparison, myotubes obtained from other species, such as mice, contract much more strongly under the same conditions.

“We set out to develop a new model that could help not only basic muscle research, but also the diagnostic use of muscle cells obtained from patient biopsy samples, which are a very limited resource,” said Dr. Makoto Kanzaki, Associate Professor at the Graduate School of Biomedical Engineering, Tohoku University.

To aid the growth of human myotubes, the researchers used muscle cells taken from a mouse cell line to create a population of nourishing connective tissues. The mouse cells, known as ‘feeder cells,’ supply essential proteins to encourage the growth of the human cells. They used this method to nurture human myotubes grown from muscle stem cells obtained from sIBM patients.

The researchers used several different imaging techniques to examine the properties of the muscle cells from sIBM patients and to compare them with those from healthy humans. They found that sIBM myotubes have basically the same muscular properties as normal myotubes. Both contracted vigorously upon electrical stimulation, showed the development of muscle fibre structures called sarcomeres and had raised levels of a skeletal muscle protein called myokine.

However, they found that myotubes from sIBM patients had raised levels of a protein called TDP-43 after contraction, while healthy muscle cells did not. This suggests that TDP-43 may be involved in the disease.

“The use of feeder cells expands the usefulness of existing lab-based exercise models, and our system could potentially be used to evaluate the effects of exercise on patient muscle cells,” explains Dr. Kanzaki.

This muscle cell model may help to improve our understanding of muscle cell conditions, particularly in response to muscle contractions. This could provide important diagnostic information to aid the development of customized therapies. 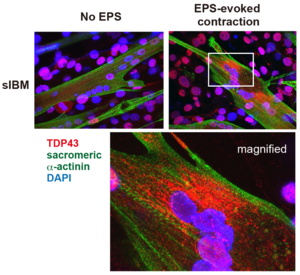