A new study led by the Institut de Ciències del Mar (ICM-CSIC) and the University of Barcelona (UB) has revealed that marine plastic pollution could contribute to the introduction and transport of non-native species that attach to these particles of anthropogenic origin.

To carry out the study, recently published in the specialised journal Marine Pollution Bulletin, the scientific team identified various species attached to plastic debris found both in water samples and on the seabed and beaches of the Catalan coast. In particular, bryozoans -a group of generally small aquatic invertebrates- were the most diverse, with 15 species identified, one of which is not native, although it had previously been detected in other sectors of the Mediterranean: Arbopercula tenella.

"It is important to undertake constant monitoring to confirm the establishment of this and other non-native species in natural or artificial habitats on the Catalan coast, as in the future they could become invasive and, consequently, contribute to the reduction of natural biodiversity, making ecosystems less resilient to change", explains Blanca Figuerola, an expert in bryozoans at the ICM-CSIC, member of the Medrecover Group and one of the authors of the study.

Also, researchers studied the different types of plastics found, since "they may be relevant for distinct the communities attached to the plastic - what we call "biofouling" - probably due to their chemical structure or surface properties", as states Arnau Subías, member of the ICM-CSIC, the UB's Marine Geosciences GRC, and co-author of the study.

The work reveals that all bryozoan species found on plastics collected from the seafloor are characteristic of shallower areas, and that most of these plastics have lower densities than seawater.

According to Figuerola, "this shows that the colonisation of plastic surfaces by different organisms plays an important role in the sinking of plastic debris, so the identification of these organisms can provide us key information on the processes of plastic dispersion and transport in the oceans". Low-density plastics would not end up in the sediments of the seabed if it were not for the added weight of organisms attached to their surface.

In this sense, Anna Sànchez, lecturer in the UB Department of Earth and Ocean Dynamics, member of the UB's Marine Geosciences GRC and co-author of the study, explains that "the presence of different species attached to the plastics found on the beaches suggests that this deposition is not permanent, and that these particles that have been deposited on the seabed may first be resuspended by currents, and then transported back to the coast due to the waves during storms".

This supports the idea that a significant amount of plastic entering the ocean is temporarily trapped in the coastal zone, but can also be transported to great depths by energetic hydrodynamic currents.

All in all, the study shows that plastics can act as dispersal vectors, providing substrates that can be used as habitats by a wide variety of marine species, and can therefore eventually alter marine ecosystems. For example, in this case, the research team found small-spotted catshark (Scyliorhinus canicula) eggs attached to plastic, which is something that has never been seen before, but could have a significant impact on the geographic distribution and habitat of this species.

Marine plastic pollution could contribute to the introduction of invasive species 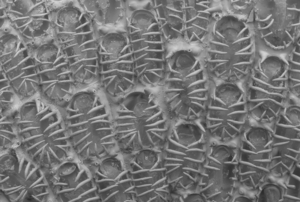 Researchers found 15 species of bryozoan attached to the plastic, one of which, that appears in the photograph (Arbopercula tenella), is not native to the area where it was found / Emanuela di Martino. 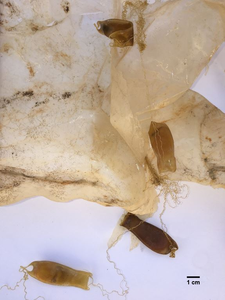 Eggs of the catshark (Scyliorhinus canicula) were also found attached to plastic during the study / Arnau Subías.