Female chimpanzees are less likely than males to go near villages and farmland used by humans, new research shows.

Scientists observed chimpanzees in their natural forest habitat, and when they approached villages and cropland.

Gatherings of chimpanzees – our closest living relatives – got smaller near areas used by humans, mostly because fewer females ventured into these places.

The study – by the University of Exeter and the Bulindi Chimpanzee and Community Project, Uganda – is the first to examine how a landscape dominated by humans affects the social lives of chimpanzees.

"Wild animals are being forced to modify their behaviour due to the risks of living alongside humans," said lead author Zoe Satsias, a Conservation and Biodiversity Masters student at the University of Exeter.

"These chimpanzees encounter people, domestic dogs and other livestock daily, when foraging on crops such as jackfruit, and this frequently leads to conflict.

"Croplands pose a further risk to chimpanzees due to the occasional presence of snares or traps, and proximity to roads – including a main tarmacked road that divides their home range."

Dr Matt McLennan, who runs the Bulindi Chimpanzee and Community Project, added: "Male chimpanzees seem unperturbed by the prospect of running into people, and are even willing to engage in confrontations with villagers.

"But females – especially those with dependent offspring – tend to avoid contact with people, which explains why subgroups were smaller outside the forest."

The researchers measured social connections among group members by observing which chimpanzees were frequently close together.

"While males and females were equally central in their social networks inside the forest, in more risky croplands and village areas the core of the social network was dominated exclusively by males," said Dr Kimberley Hockings, of the Centre for Ecology and Conservation on Exeter's Penryn Campus in Cornwall.

"Our study highlights how male and female chimpanzees are adapting differently to human encroachment, and points to a difference in risk perception between the sexes."

This sex difference could have far-reaching consequences affecting the survival of chimpanzees in fast-changing habitats.

"The avoidance of certain areas by females – resulting in them being in the periphery of their social networks – could disrupt the spread of information and reduce social learning opportunities for younger chimpanzees, potentially supressing the learning of new behaviours that could help them survive," Dr Hockings said. 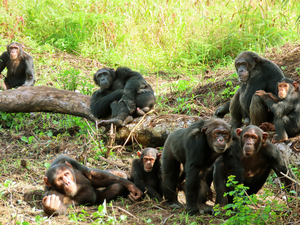 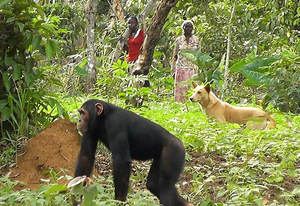 A young male chimp in croplands