The related results were published in Applied Surface Science.

CaF2 crystal directly affects the stability and life of UV optical system. Therefore, scientists have turned their attention to the process and mechanism of the interaction between UV laser and the CaF2 crystal to improve its laser damage resistance.

In this research, scientists completed laser irradiation experiment on CaF2 crystal with this 248 nm excimer laser. They obtained the evolution of damage morphology and the laser induced damage thresholds of three different CaF2 crystals planes (100), (110) and (111).

The results displayed different damage morphology. The damage of plane (111) showed the phenomenon of lamellar stripped, while there was a burst-like damage on plane (110) and plane (100), which originated from the crack or local damage point.

These results pave the way for the application of CaF2 crystals with different crystal planes in UV laser system. 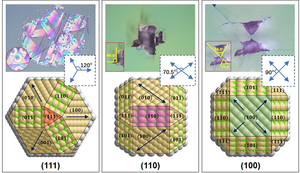