A new study led by researchers at the University of Miami (UM) Rosenstiel School of Marine and Atmospheric Science found that corals that underwent a stressful temperature treatment in the laboratory for 90 days were more tolerant to increased water temperatures.

These findings offer coral restoration scientists with a new approach to potentially increase the success rate of planting nursery-raised staghorn coral onto degraded reefs as climate change continues to warm ocean temperatures, resulting in more frequent coral bleaching events. Staghorn coral (Acropora cervicornis) has died off throughout South Florida and the Caribbean, and is listed as “threatened” on the Endangered Species Act.

While previous “stress-hardening” experiments on corals have utilized exposures to short-term temperatures, the UM Rosenstiel School team assessed the effect of a long-term, variable treatment where temperatures reached a stressful level for a brief period of time, twice per day.

“This ‘training’ regime is akin to an athlete preparing for a race,” said the study’s lead author Allyson DeMerlis, a Ph.D. student at the UM Rosenstiel School. “We were able to demonstrate that this temperature treatment can boost the corals’ stamina to heat stress.”

To conduct the experiment, DeMerlis and scientists at the National Oceanic and Atmospheric Administration’s (NOAA) Atlantic Oceanographic and Meteorological Laboratory, and UM’s Cooperative Institute for Marine and Atmospheric Studies, collected coral fragments from six distinct genetic individuals of Caribbean staghorn coral from the UM Rosenstiel School’s Rescue a Reef coral nursery and randomly assigned them to one of three groups: (1) field control, (2) laboratory control, and (3) variable temperature treatment. The laboratory control and variable temperature-treated corals were subjected to a three-month treatment period where the laboratory controls were kept at a constant 28 degrees Celsius while the variable temperature regime corals were subjected to fluctuating temperatures between 28 to 31 degrees Celsius, twice daily for three months.

The scientists then measured bleaching progression photographically as well as the number of days that a coral endured thermal stress before bleaching. They found that the variable temperature treatment significantly improved coral endurance in thermal stress, on the order of several days, in comparison to the untreated corals. In addition, they found that untreated corals were more likely to quickly succumb to disease-like signs of tissue loss.

The findings demonstrate the benefit of using a variable temperature treatment in the laboratory setting for maintaining staghorn coral over the traditional static temperatures. This may be translated in the field for restoration practitioners, specifically for identifying locations  where their coral nurseries and outplanting sites can be exposed to more fluctuating temperatures.

“We have unfortunately reached the point where active intervention and restoration are necessary to ensure that valuable coral reefs are able to persist for generations to come,” said Ian Enochs, senior author of the study and a coral scientist at NOAA’s Atlantic Oceanographic and Meteorological Laboratory, Ocean Chemistry and Ecosystems Division.  “We want to increase the efficiency and efficacy of these efforts, and ultimately ensure that the corals that are placed back out on a reef have the greatest chance of enduring the stressful conditions they will face in the future.”

“Our findings bring a glimmer of hope to the uncertain future of corals, as we identified a treatment in which we can enhance their tolerance to heat stress,” said DeMerlis.

The study was supported by a grant from the NOAA Coral Reef Conservation Program.

The University of Miami is a private research university and academic health system with a distinct geographic capacity to connect institutions, individuals, and ideas across the hemisphere and around the world. The University’s vibrant and diverse academic community comprises 12 schools and colleges serving more than 17,000 undergraduate and graduate students in more than 180 majors and programs. Located within one of the most dynamic and multicultural cities in the world, the University is building new bridges across geographic, cultural, and intellectual borders, bringing a passion for scholarly excellence, a spirit of innovation, a respect for including and elevating diverse voices, and a commitment to tackling the challenges facing our world. Founded in the 1940’s, the Rosenstiel School of Marine and Atmospheric Science has grown into one of the world’s premier marine and atmospheric research institutions. Offering dynamic interdisciplinary academics, the Rosenstiel School is dedicated to helping communities to better understand the planet, participating in the establishment of environmental policies, and aiding in the improvement of society and quality of life. www.rsmas.miami.edu.

Corals can be “trained” to tolerate heat stress, study finds 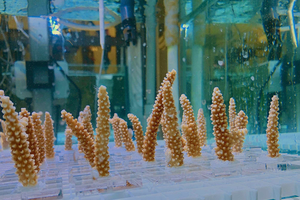 Corals Can Be “Trained” to Tolerate Heat Stress, Study Finds