The Vilcek Foundation has announced that in 2023 it will award three Vilcek Prizes for Creative Promise in Biomedical Science. The foundation has allocated $150,000 in support of the prizes, which honor the work of immigrant scientists in the United States.

The Vilcek Prizes for Creative Promise are a part of the Vilcek Foundation Prizes Program.  Awarded annually since 2006, the Vilcek Foundation Prizes are awarded in biomedical science, and in a rotating category in the arts and humanities. The prizes recognize and celebrate the contributions of immigrants in the United States, and extol the value of immigration for intellectual and scientific advancement.

“The United States has long been a bastion for scientific research and discovery,” says Vilcek Foundation Chairman and CEO Jan Vilcek. “Scientists have a freedom here to pursue research they are passionate about, and to collaborate with individuals from some of the world’s top scientific institutions. With the Creative Promise Prizes, we aim to recognize and provide support for young, foreign-born scientists at a pivotal point in their careers.”

To be eligible for a Vilcek Prize for Creative Promise in Biomedical Science, candidates must hold a doctoral degree and be a principal investigator with an academic institution or accredited scientific research organization.

Candidates must have been born outside the United States to non-American parents, and be living and working in the United States. DACA recipients, asylees, and asylum seekers are strongly encouraged to apply.

Applications for the Vilcek Prizes for Creative Promise in Biomedical Science will be accepted through June 10, 2022, at 5:00 p.m. EDT. Full application details and eligibility requirements are available at the Vilcek Foundation and online at vilcek.org.

Individuals with questions about the application process or the Vilcek Foundation Prizes program should direct their questions to Chief Program Officer Shinnie Kim at creativepromise@vilcek.org.

The Vilcek Foundation raises awareness of immigrant contributions in the United States and fosters appreciation of the arts and sciences. The foundation was established in 2000 by Jan and Marica Vilcek, immigrants from the former Czechoslovakia. The mission of the foundation—to honor immigrant contributions to the United States, and more broadly to foster appreciation of the arts and sciences—was inspired by the couple’s respective careers in biomedical science and art history. Since 2000, the foundation has awarded over $6.4 million in prizes to foreign-born individuals and supported organizations with over $5.6 million in grants. 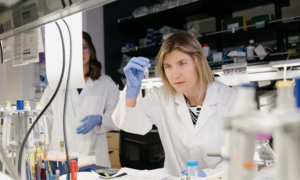