Most quantum information technologies including quantum computers – considered a step above supercomputers – and quantum communication that cannot be hacked are based on the principle of quantum entanglement. However, entangled systems exist in a small microscopic world and are pretty fragile. Quantum metrology, which provides enhanced sensitivity over conventional measurements in precision metrology, has also mainly relied on quantum entanglement, so that it is hard to implement in real life applications. Recently, a Korean research team has proposed a method to achieve the quantum metrology precision without using entangled resources.

WVA-based metrology, which is one of the methods for measuring quantum effects, is an approach to obtain the most information on the quantum system with minimal impact. It can efficiently measure the system without collapsing the quantum state.

By using the weak value measured in this way, it is possible to amplify tiny physical effects such as ultrasmall phase shifts. Though this method has fewer errors compared to the conventional ones, it has a critical limitation of lower detection probability. Methods to overcome this limitation has been proposed by utilizing entanglement, but the difficulty in generating a large-scale quantum entanglement has been a major challenge to realize the Heisenberg-limited metrology.

The researchers have confirmed that in the weak-value amplification, the Heisenberg limit is reached without using entanglement through the iterative interaction between different quantum states. They explain that this results from the local iterative interactions between each particle of an entangled system and a meter, rather than from the quantum entanglement itself.

“This study will contribute to the practical use of quantum metrology by verifying that entanglement is not an absolute requirement for reaching the Heisenberg limit,” remarked Professor Yoon-Ho Kim who led the study.

This study was recently published in the international academic journal Physical Review Letters. 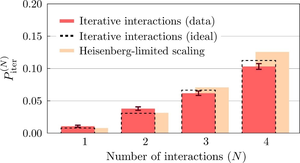