Scientists at the Centro Nacional de Investigaciones Cardiovasculares (CNIC) have identified a nuclear import mechanism essential for organ growth and development. Manipulation of this mechanism has potential applications in the control of organ growth and organ regeneration.

Organ growth and regeneration require the entry into the cell nucleus of proteins that activate essential genes for these processes. This process is the subject of a new study by CNIC scientists, led by Dr. Miguel Ángel del Pozo Barriuso, who heads the Mechanoadaptation and Caveolae Biology group, and group member Dr. Asier Echarri Aguirre. The scientists have identified the mechanism that controls the nuclear import of these proteins in response to mechanical stimuli, such as the hemodynamic forces generated by arterial blood flow, tumor rigidity, or locomotory movements during routine activities like walking or sports. The results are published today in Nature Communications.

These events require specific factors that are activated by mechanical signals and enter the nucleus, where they activate the expression of genes required to promote organ growth or regeneration.

“One of the most important of these factors is the protein YAP,” explained Dr. del Pozo Barriuso. “Its nuclear import is a highly regulated process, and only takes place when specifically required. Macromolecules like YAP enter the nucleus through nuclear pores by binding to a nuclear transport or shuttle protein.”

What makes YAP especially interesting is that, in response to mechanical forces acting on the tissue, “it is activated and enters the nucleus, where it switches on several genes that determine the growth of the affected organ,” explained Dr. Echarri Aguirre. “Moreover, YAP is mutated in many diseases, making it even more interesting,” added study first author María García.

Nevertheless, although YAP has been studied extensively due to its roles in organ regeneration, cardiovascular disease, and cancer, its nuclear entry route and the nuclear shuttle protein it interacts with were unknown.

The CNIC scientists have now shown that the YAP shuttle protein partner is importin-7, which binds YAP and transports it to the nucleus, where it can induce cell and tissue growth.

The CNIC team, in partnership with colleagues at the Max Planck Institute for Biophysical Chemistry in Germany and the Instituto Cajal in Madrid, have also demonstrated that YAP monopolizes importin-7, thereby restricting nuclear access by other factors. The study thus shows that YAP not only controls genes important for organ growth, but also regulates nuclear shuttle activity and the nuclear import of other factors.

The Nature Communications study also identifies a new target for the pharmacological blockade of nuclear import; by reducing the expression of importin-7 in organs of the fruit fly Drosophila, the scientists were able to block YAP nuclear import and thus prevent excess organ growth (Figure 1).

“This finding has major clinical potential,” said María García, “because the progression of several diseases, including atherosclerosis, cancer, and fibrosis, is in part driven by uncontrolled and deleterious nuclear import of YAP.”

“Blocking the binding of YAP to importin-7 would thus provide a way to prevent inappropriate YAP nuclear entry and subsequent disease.”

The study thus identifies a new target for the development of drugs targeting YAP nuclear import in diseases associated with an enormous societal and economic cost. 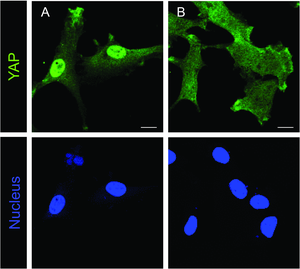