Parenting is not the only way moms and dads impact the behavior of their offspring. Genes matter, too. And although most of our genes are inherited in pairs—one copy from each parent—moms and dads exert their genetic influence in different ways. According to new research led by scientists at University of Utah Health, each parent has their own impact on hormones and other chemical messengers that control mood and behavior.

“We're really intrigued that there is this untapped area of biology that controls our decisions,” says Christopher Gregg, Ph.D., principal investigator and associate professor in the Department of Neurobiology at U of U Health. Gaining a clearer picture of the genetic factors that shape behavior is a crucial step toward developing better diagnoses and treatments for psychiatric disorders, he says.

In the March 8, 2022, issue of the journal Cell Reports, Gregg’s research team reports that certain groups of cells in the brains of mice rely exclusively on the mother’s copy of a gene that is needed to produce essential chemical messengers in the brain called neurotransmitters. In those cells, the father’s copy of the gene remains switched off. However, in a different organ, the adrenal gland, certain cells favor the father’s copy of the same gene. There, the gene is involved in producing the stress hormone, adrenaline.

After identifying this unexpected switch in parental control of a single gene, Gregg’s team went on to demonstrate that it had consequences for behavior. They found that each parent’s gene affected sons and daughters differently: certain decisions in sons were controlled by their mother’s gene, whereas fathers had control over some decision-making in daughters.

Evolutionarily speaking, this form of genetic regulation may reflect different parental priorities, Gregg says. “Not everybody has the same sort of interests, outcomes, and selective effects,” he explains. “Daughters need to rear litters. Sons often disperse and will go to new environments.” Consequently, it may be in parents’ interest to influence behavior differently in their sons and daughters.

"The revelation that maternal and paternal alleles of the same gene along the brain-adrenal axis could have disparate, or possibly even antagonistic, phenotypic consequences on behavior is an intriguing observation,” says the paper’s first author, Paul Bonthuis, Ph.D., an assistant professor in the Department of Comparative Biosciences at the University of Illinois at Urbana-Champaign.

“The brain-adrenal axis is a very important part of mammalian biology that controls behavior and affects stress, mood, metabolism and decision-making,” Gregg explains. He says that this finding is a first step toward understanding how a parent’s genes may affect more routine behaviors and related health conditions in people, from mental illnesses and addiction to cancer and Alzheimer’s disease.

In the current study, Gregg and his colleagues focused primarily on a gene called dopa decarboxylase, which neurons need to manufacture dopamine, serotonin, and noradrenaline—neurotransmitters that regulate an array of functions from mood to movement.

Both parents’ copies of the dopa decarboxylase gene are active in the brain, but Gregg and his colleagues previously uncovered a slight preference, brainwide, for the maternal copy. To investigate whether that preference was localized to particular cells or brain regions, the team genetically engineered mice to attach a fluorescent tag to the dopa decarboxylase enzyme—red if it was produced using a gene inherited from mom, blue if a gene from dad had been used. Then they could simply look under a microscope to see which parent’s copy of the gene was active.

After examining the entire mouse brain, they found 11 regions that contained groups of neurons that use only the mom’s copy of the dopa decarboxylase gene. Dopa decarboxylase is also used in the adrenal gland, where it’s needed to produce the adrenaline hormone that triggers “flight or fight” responses to danger or stress, so the researchers looked there too. There, they found groups of cells that relied exclusively on the gene copy inherited from dad.

Since dopa decarboxylase is so important for regulating stress, fear, anxiety, and reward processing, the researchers wanted to know how this imprinting gave either parent more influence over certain behaviors in their offspring.

To find out, they analyzed the way mice with mutations in either copy of the gene foraged for food. Mice in their experiments were free to explore, acting on conflicting fears and motivations much as they would in the wild. Their movements as they took risks, retreated to safety, and resumed foraging seemed mostly random—but Gregg’s team used machine learning algorithms to find patterns in the complex behavior. By breaking foraging behavior down into modules, they identified behavioral differences associated with each parent’s copy of the dopa decarboxylase genes.

These experiments show that switching off one parent’s copy in a select group of cells is enough to have significant impacts on behavior. Gregg says his team has hints that several genes are subject to this type of bias toward using one parent’s copy.

“I dream of this new field of decision genetics, where we systematically uncover the parental gene copies that control specific decisions and actions in particular contexts,” Gregg says. Such studies could lead researchers to cells and neural circuits with previously unrecognized roles in behavior.

In addition to Gregg and Bonthuis, collaborators were Susan Steinwand, Cornelia N. Stacher, Jared Emery, Wei-Chao Huang, Stephanie Kravitz and Elliott Ferris from U of U Health.

The research was supported by the National Institutes of Health and published as “Noncanonical genomic imprinting in the monoamine system determines naturalistic foraging and brain-adrenal axis functions” in Cell Reports.

University of Utah Health provides leading-edge and compassionate medicine for a referral area that encompasses 10% of the U.S., including Idaho, Wyoming, Montana and much of Nevada. A hub for health sciences research and education in the region, U of U Health has a $428 million research enterprise and trains the majority of Utah’s physicians, including more than 1,250 health care providers each year at its Schools of Medicine and Dentistry and Colleges of Nursing, Pharmacy and Health. With more than 20,000 employees, the system includes 12 community clinics and four hospitals. For ten straight years, U of U Health has ranked among the top 10 U.S. academic medical centers in the Vizient Quality and Accountability Study. 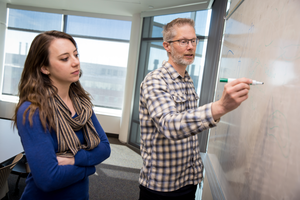 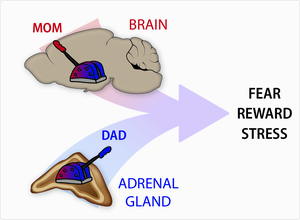