Over a three-month period, the average car in the U.S. produces one metric ton of carbon dioxide. Multiply that by all the gasoline-powered cars on Earth, and what does that look like? An insurmountable problem.

But new research efforts say there’s hope if we commit to net-zero carbon emissions by 2050, and replace gas-guzzling vehicles with electric vehicles, among many other clean-energy solutions.

In order to help our nation meet this goal, scientists like William Chueh and David Shapiro are working together to come up with new strategies to design safer, long-distance batteries made from sustainable, earth-abundant materials.

Chueh is an associate professor of materials science and engineering at Stanford University aiming to redesign the modern battery from the bottom up. He relies on state-of-the art tools at U.S. Department of Energy scientific user facilities such as Berkeley Lab’s Advanced Light Source (ALS) and SLAC’s Stanford Synchrotron Radiation Light Source – synchrotron facilities that generate bright beams of X-ray light – to unveil the molecular dynamics of battery materials at work.

For nearly a decade, Chueh has collaborated with Shapiro, a senior staff scientist at the ALS and a leading synchrotron expert – and together, their work has resulted in stunning new techniques revealing for the first time how battery materials work in action, in real time, at unprecedented scales invisible to the naked eye.

They discuss their pioneering work in this Q&A.

Q: What got you interested in battery/energy storage research?

Chueh: My work is almost entirely driven by sustainability. I got involved in energy materials research when I was a graduate student in the early 2000s – I was working on fuel cell technology. When I joined Stanford in 2012, it became obvious to me that scalable and efficient energy storage is crucial.

Today, I’m very excited to see that the energy transition away from fossil fuels is now becoming a reality and that it is being implemented at incredible scale.

I have three goals: First, I am doing fundamental research that lays the foundation to enable the energy transition, especially in terms of materials development. Second, I am training world-class scientists and engineers who will go out in the real world to solve these problems. And then third, I'm taking the fundamental science and translating it to practical use through entrepreneurship and technology transfer.

On that final point, I have the pleasure of founding Mitra Chem, a battery materials company, just a little bit less than a year ago during the pandemic. Mitra Chem is working to commercialize some of these ideas.

So hopefully that gives you a comprehensive view of what drives me and what I think it takes to make a difference: It's the knowledge, the people, and the technology.

Shapiro: My background is in optics and coherent X-ray scattering, so when I first started working at the ALS in 2012, batteries weren’t really on my radar. I was tasked with developing new technologies for high spatial resolution X-ray microscopy, but this quickly led to the applications and trying to figure out what researchers at Berkeley Lab and beyond are doing and what their needs are.

At the time, around 2013, there was a lot of work at the ALS using various techniques exploiting the chemical sensitivity of soft X-rays to study phase transformations in battery materials, lithium iron phosphate (LiFePO4) in particular among others.

I was really impressed with Will’s work as well as with Wanli Yang, Jordi Cabana (a former staff scientist in Berkeley Lab’s Energy Technologies Area (ETA) who is now an associate professor at the University of Illinois Chicago), and others whose work also built off of work by ETA researchers Robert Kostecki and Marca Doeff.

I knew nothing about batteries at the time, but the scientific and social impact of this area of research quickly became apparent to me. The synergy of research across Berkeley Lab also struck me as very profound, and I wanted to figure out how to contribute to that. So I started to reach out to people to see what we could do together.

As it turned out, there was a great need to improve the spatial resolution of our battery materials measurements and to look at them during cycling – and Will and I have been working on that for nearly a decade now.

Q: Will, as a battery scientist, what would you say is the biggest challenge to making better batteries?

What we're trying to do is understand how we can create a single battery technology that is safe, long-lasting, and can be charged in 10 minutes.

And those are the fundamental insights that our experiments at Berkeley Lab’s Advanced Light Source are trying to do: To uncover those unexplained tradeoffs so that we can go beyond today’s design rules, which would enable us to identify new materials and new mechanisms so that we can free ourselves from those restrictions.

Q: What unique capabilities does the ALS offer that have helped to push the boundaries of battery or energy storage research?

Chueh: In order to understand what's going on, we need to see it. We need to make observations. A key philosophy of my group is to embrace the dynamics and the heterogeneity of battery materials. A battery material is not like a rock. It's not static. You are charging and discharging it every day for your phones and every week for your electric cars. You're not going to understand how a car works by not driving it.

The second part is that heterogeneous battery materials are extremely length spanning. A battery cell is typically a few centimeters tall, but in order to understand what’s going on inside the battery – and I have beautiful images for this – you want to see all the way down to the nanoscale and to the atomic scale. That's about 10 orders of magnitude of length.

Shapiro: Scanning transmission X-ray microscopy (STXM) is a very popular synchrotron-based method. Most synchrotrons around the world have at least one STXM instrument while the ALS has three – and a fourth is on the way through the ALS Upgrade (ALS-U) project.

I think a few things make our program unique. First, we have a portfolio of instruments with specializations. One is optimized for light element spectroscopy so an element like oxygen, which is a critical ingredient in battery chemistry, can be precisely characterized.

Another instrument specializes in mapping chemical composition at very high spatial resolution. We have the highest spatial resolution X-ray microscopy in the world. This is very powerful for zooming in on the chemical reactions happening within a battery’s individual nanoparticles and interfaces.

Our third instrument specializes in “operando” measurements of battery chemistry, which you need in order to really understand the physical and chemical evolution that occurs during battery cycling.

We have also worked hard to develop synergies with other facilities at Berkeley Lab. For instance, our high-resolution microscope uses the same sample environments as the electron microscopes at the Molecular Foundry, Berkeley Lab’s nanoscience user facility – so it has become feasible to probe the same active battery environment with both X-rays and electrons. Will has used this correlative approach to study relationships between chemical states and structural strain in battery materials. This has never been done before at the length scales we have access to, and it provides new insight.

Q: How will the ALS Upgrade project advance next-gen energy storage technologies? What will the upgraded ALS offer battery/energy-storage researchers that will be unique to Berkeley Lab?

Shapiro: The upgraded ALS will be unique for a few reasons as far as microscopy is concerned. First, it will be the brightest soft X-ray source in the world, providing 100 times more X-rays on the sample than what we have today. Scanning microscopy techniques will benefit from such high brightness.

This is both a huge opportunity and a huge challenge. We can use this brightness to measure the data we get today – but doing this 100 times faster is the challenging part.

Such new capabilities will give us a much more statistically accurate look at battery structure and function by expanding to larger length scales and smaller time scales. Alternatively, we could also measure data at the same rate as today but with about three times finer spatial resolution, taking us from about 10 nanometers to just a few nanometers. This is a very important length scale for materials science, but today it’s just not accessible by X-ray microscopy.

Another thing that will make the upgraded ALS unique is its proximity to expertise at the Molecular Foundry; other science areas such as the Energy Technologies Area; and current and future energy research hubs based at Berkeley Lab. This synergy will continue to drive energy storage research.

Chueh: In battery research, one of the challenges we have right now is that we have so many interesting problems to solve, but it takes hours and days to do just one measurement. The ALS-U project will increase the throughput of experiments and allow us to probe materials at higher resolution and smaller scales. Altogether, that adds up to enabling new science. Years ago, I contributed to making the case for ALS-U, so I couldn't be prouder to be part of that – I’m very excited to see the upgraded ALS come online so we can take advantage of its exciting new capabilities to do science that we cannot do today.

How x-rays can make better batteries 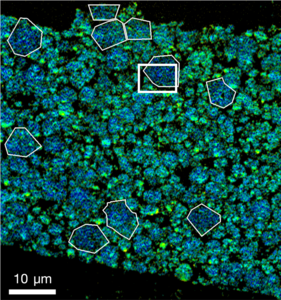