Around the world, between 40 and 50 volcanoes are currently erupting or in states of unrest, and hundreds of millions of people are at risk of hazards posed by these potentially active volcanos. Yet, despite the profound hazards posed to human life and property by volcanic eruptions, humanity still cannot reliably and accurately predict them, and even when forecasts are accurately made by experts, they may not afford ample time for people to evacuate and make emergency preparations.

Accurate and reliable predictions have remained an elusive target largely because volcanologists do not fully understand the natural dynamics and processes of the magma underneath a volcano before it finds its way to the surface. Now, the results of a new study led by volcanologist Dan Rasmussen, a Peter Buck Fellow at the Smithsonian’s National Museum of Natural History, may bring experts one step closer to accurately forecasting volcanic eruptions.

The study, published today, March 10, in the journal Science, finds that, for the world’s most common type of volcano, magma with higher water content tends to be stored deeper in the Earth’s crust. The finding identifies what some scientists expect is the most important factor controlling the depth at which magma is stored.

“This study connects the depth at which magma is stored to water, which is significant because water largely initiates and fuels eruptions,” Rasmussen said. He explained that water drives eruptions analogously to how carbon dioxide can make a shaken-up soda bottle explode.

“With water dissolved in magma that is stored beneath a volcano, if there is a sudden decrease in pressure, like when a shaken soda bottle cap is suddenly opened, gas bubbles form and those cause the magma to rise and jet out the volcano, similar to when a soda shoots out of a bottle top,” Rasmussen said. “More water content in magma means more gas bubbles and potentially a more violent eruption.”

“These results move us closer to understanding the physics and conditions of magma storage beneath volcanoes, and that is an essential ingredient for the kinds of detailed physics-based models necessary to more accurately forecast eruptions,” Rasmussen said.

The study was completed through new field work and lab analyses in addition to reanalysis of existing data collected from past volcanic eruptions tracked by the Smithsonian’s Global Volcanism Program.

Rasmussen began his research in 2015 while completing his doctorate at Columbia University’s Lamont-Doherty Earth Observatory with his advisor, volcanologist Terry Plank, who suggested he pursue the still-open question of why magma storage depth varies from one volcano to the next and what controls that depth.

Along with a team that included geophysicist Diana Roman of the Carnegie Institution for Science, Rasmussen went into the field to collect volcanic material from eight volcanoes located in the rugged and remote Aleutian Islands of Alaska.

The researchers focused on a particular geological setting when selecting volcanoes for this study: so-called arc volcanoes that occur at the intersection of two converging tectonic plates. Arc volcanoes, like those found in the Aleutians, are the most numerous type of volcano on Earth and comprise the entirety of the infamous “Ring of Fire” encircling the Pacific Plate, making them the most obvious target for improving predictive capacities.

Using ships and helicopters, the team collected bits of volcanic ash from these eight volcanoes amid rough seas and, on the island of Unimak, the threat of giant brown bears. Volcanic ash was the primary target of the expedition because it can contain green crystals made of olivine—each one with a diameter of about 1 millimeter, about the thickness of a plastic ID card.

Underground, these olivine crystals sometimes trap tiny bits of magma when they form. After an eruption sends these special olivine crystals to Earth’s surface, the magma inside them cools and becomes glass. By analyzing the chemical composition of these miniscule pieces of cooled magma from the inside of a volcano, the researchers were able to estimate the magma’s water content.

To examine the relationship between the estimated water content of these magma reservoirs and their respective storage depths, the researchers scoured the scientific literature and created an accompanying list of 331 depth estimates for 112 volcanoes.

Rasmussen said the Smithsonian’s Global Volcanism Program’s database “was key in compiling these lists because it’s a really good resource for eruption history, and we only wanted to consider volcanoes that had recently erupted.” Rasmussen and the research team focused on recent eruptions because magma reservoirs do not appear to move a lot following an eruption, and so any estimates of depth or water content that were made using recently erupted material have the highest likelihood of accurately reflecting the current state of the volcano’s magma reservoir.

After years of field work, geochemical analysis and literature review, the team was able to plot the estimated magma storage depths for 28 volcanoes from around the world against their respective estimated magmatic water contents. The results were strikingly clear: a magma reservoir’s water content strongly correlated with its storage depth. In other words, magmas that contained more water tended to be stored deeper in the Earth’s crust.

The study also shows that a magma’s water content is responsible for controlling its depth, rather than merely correlating to it. The team showed this causal relationship by detecting the presence of chemical tracers associated with the formation of water-containing magmas in Earth’s mantle.

“If storage depth determined water content in magma, it could still create the correlation between water content and depth that we observed, but it wouldn’t produce the chemical tracers of the magma’s initial water content that we found,” Rasmussen said.

As for how water content might determine magma storage depth, Rasmussen and his co-authors argue that it has to do with a process known as degassing in which the water mixed in with the magma forms bubbles of gas. When magma rising through the Earth’s crust begins to degas, it becomes more viscous, which the researchers suggest causes the magma’s ascent to slow and stall.

The evidence that water content largely controls magma storage depth overturns the most widely accepted explanation in the field today, which contends that magma rises through cracks in Earth’s crust because the molten rock is more buoyant than the surrounding crust, settling at its storage depth because it reaches neutral buoyancy where magma is no more buoyant than its surroundings.

Rasmussen said the next step for this research is to see if these findings hold for volcanoes in other geologic settings such as hot-spot volcanoes like the Hawaiian Islands or rift volcanoes like those in East Africa. Beyond this extension of the research, Rasmussen said an even larger question looms: “If magma water content controls magma storage depth, what controls magma water content?”

Funding and support for this research were provided by the Smithsonian, the National Science Foundation, the Community Foundation for Southwest Washington and the U.S. Geological Survey. 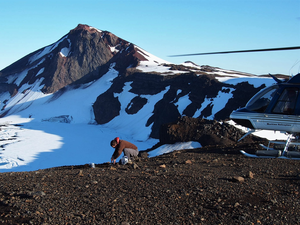 Dan Rasmussen, Peter Buck Fellow at the Smithsonian’s National Museum of Natural History, collects volcanic ash samples from the rim of the summit caldera on Akutan Volcano in 2016. 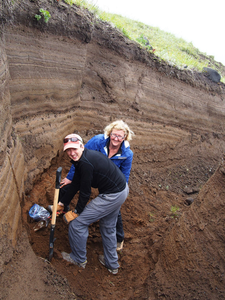 Dan Rasmussen, Peter Buck Fellow at the Smithsonian’s National Museum of Natural History, and Terry Plank, volcanologist at Columbia University’s Lamont-Doherty Earth Observatory, collect samples of volcanic ash from a narrow ravine created by a small stream on the flank of Cleveland Volcano in 2016.