A change in the volume of red blood cells has been documented in astronauts since the earliest space missions. Thanks to an experiment conducted aboard the International Space Station, a research team from Canada has found that its cause is a significantly increased rate of red blood cell destruction.

On Earth, our bodies create and destroy 2 million red blood cells every second. During six-month space missions, the bodies of the astronauts studied were destroying 3 million per second, or 54% more than was typical before flight.

This finding, reported in a paper published in the journal Nature Medicine, resulted from MARROW, an investigation sponsored by the Canadian Space Agency (CSA) that examined changes in bone marrow and red and white blood cell functions in space.

Bone marrow produces red and white blood cells. Red blood cells deliver oxygen to all the cells of the body. Anemia, a condition where too few red blood cells carry oxygen to the body’s tissue cells, can cause fatigue along with decreased strength, cognitive ability, and heart function.

Researchers thought that changes in the number of red blood cells in space might be a result of shifts in body fluids that occur when an astronaut first arrives in space. This shift causes astronauts to lose 10 percent of the liquid in their blood vessels. One theory for the change was that their bodies rapidly destroyed 10 percent of red blood cells to restore the proper balance between fluid and cells.

However, the researchers found that the red blood cell destruction continued to occur long after the initial fluid shifts.

“Our bodies are very good at recycling key ingredients of red blood cells, such as iron, but not perfect,” said Trudel. “The cost of the increased destruction and production of red blood cells must be taken into account in overall nutrition strategies.”

The level of red blood cell destruction sharply decreased when astronauts returned to Earth but remained above normal even a year later. That finding suggests that the high rate of red blood cell turnover may have lasting effects.

“The control of red blood cell numbers changes in space,” Trudel said. “That may cause structural changes to the organs involved that persisted a year after landing. This was something of a surprise and raises questions that need to be answered.”

The dynamics of red blood cell turnover could pose a potential challenge for astronauts on future long-duration missions to the Moon and Mars – and possibly for the growing number of space tourists. Those taking even brief flights to space may benefit from preflight screening for risk factors and postflight monitoring of conditions affected by anemia and red blood cell degradation.

“Anyone with any kind of red blood cell problem, such as existing anemia, or a health problem that can worsen with anemia, such as cardiac conditions, should be warned and perhaps take specific measures,” Trudel said.

The finding also has potential applications for cardiac rehabilitation patients on Earth, he adds. His work found that people on Earth who are hospitalized for several months or in long-term care can have anemia and weaker muscles and bones, and increased red blood cell destruction may play a role in these populations as well.

Now that researchers have identified hemolysis as the cause of red blood cell turnover in space, further study is needed to identify the mechanism behind it.

“The work does not give us a treatment or prevention, so we need to dig deeper into the mechanisms,” Trudel said. “Nonspecific treatments have not worked. Astronauts are exercising every muscle of their bodies, and these countermeasures have not resolved the hemolysis. Increased hemolysis in space is an important and immediate knowledge gap for longer missions. We need new and specific interventions for crews embarking on those missions.”

For daily updates, follow @ISS_Research, Space Station Research and Technology News, or our Facebook. For opportunities to see the space station pass over your town, check out Spot the Station. 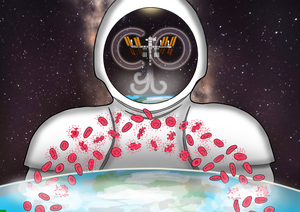 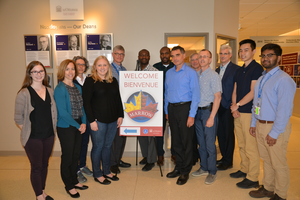 The Marrow research team and Canadian Space Agency representatives at University of Ottawa.