Researchers at the Department of Energy’s SLAC National Accelerator Laboratory study some of the most fundamental questions about our universe: What are the properties of elementary particles? What drives the expansion of the universe? But the tools they use can lead to technologies that benefit everyday life.

How to turn these inventions at the lab into real-world applications that benefit society as a whole is the work of SLAC’s Office of Technology Transfer and Private Partnerships. Through patents, licensing and partnership agreements, SLAC gives companies and organizations access to the lab’s world-class experts, facilities and technologies that are not found in the private sector.

In this Q&A, two of the office’s key leaders – Matt Garrett, director of technology transfer and private partnerships, and Susan Simpkins, proposal and contracts director – talk about SLAC’s innovation landscape and the unique opportunities it creates for tech transfer.

Tell us about technology transfer at SLAC.

Garrett: At SLAC, we develop a broad range of technologies to pursue cutting-edge research. Tech transfer is about taking that fundamental technology knowledge and, through partnerships, developing it into products that are useful to everyone.

One piece is private partnerships, which I see as a form of business development. We act as a portal for companies that want to learn about what SLAC is doing and to see if there are any interests that we could pursue together. I’ve had many engagements over the past few months with companies, small and large, that want to work with us, and some of those have led to opportunities for collaboration proposals.

In terms of tech transfer, we talk about long-term engagements and discuss how our partners could fund us. For example, we engage with customers who want to license one of our existing innovations and either build it into their company or build a start-up around it. In other cases, partners fund our research, which eventually leads to the point where we’re going to transfer our know-how to them.

Can you give us a few examples?

Garrett: A great example are projects that leverage our experience in building particle accelerators and apply that knowledge to advance targeted radiation therapy to fight cancer. When you receive this kind of therapy, there is an issue with body parts moving in the body as the radiation is being delivered, which can damage healthy tissue around a tumor. So, our researchers realized that they could build accelerators that can deliver the radiation in a much shorter time and much more precisely than what is possible with current technology and reduce some of the unwanted side effects of radiation therapy. One of these projects is PHASER, a collaboration with Stanford University and Silicon Valley company TibaRay, which aims to reduce the exposure time for patients by a factor of 100 or so.

Simpkins: Another good example is our work with autonomous vehicle developer Zoox. We just started a collaboration on projects related to A.I., centered around evaluating machine learning algorithms and methods of testing battery technology used in autonomous vehicles. ​Along those lines, we also work with Toyota Research Institute, Stanford and the Massachusetts Institute of Technology on machine learning tools to develop a long-lived electric vehicle battery that can be charged in 10 minutes.

Garrett: I think that compared to other environments, such as a university, technologies developed across the DOE national labs are quite mature. Many DOE labs do highly applied research, which includes a lot of testing and developing past a prototype, sometimes to a stage in which a technology can be deployed. That’s obviously a really good value for a company to come in and work with that technology because now they don’t have to invest as much in R&D.

I would also say that, generally, national labs don’t see tech transfer as a business enterprise for themselves. They are funded by the federal government, so the idea is to get technology out to the marketplace, which is part of the whole process of creating jobs and making the United States economically more competitive.

How do you collaborate with other Bay Area institutions on tech transfer?

Garrett: We work closely with Stanford’s Office of Technology Licensing (OTL). When an innovation has been developed at SLAC, OTL reviews that innovation and advises us on how to proceed. For instance, we would discuss if we want to pursue a patent or not. They also help with advertising the innovation. SLAC has a portfolio of 50 to 60 patents right now that the office has out for licensing. Stanford has had quite a few success stories regarding licensing their technology to big-name businesses, so it's a huge advantage for SLAC that we have them as a resource.

Simpkins: We have also teamed up with the other national labs in the Bay Area – Berkeley Lab, Sandia National Laboratories and Lawrence Livermore National Laboratory – and formed the Lab Innovation Networking Center (LINC). LINC’s focus is on fostering engagement with companies in Silicon Valley that very often don’t quite understand what the labs do and what resources we offer that might be interesting to them. The physical office will eventually be at SLAC. Last year we had a series of virtual events to get LINC started, which was very successful. Although we had focused on small businesses in the Bay Area, we also had representatives from all over the country in the audience.

What other initiatives are you pursuing?

Garrett: There are many opportunities for education and training. For instance, end of last year, a first cohort completed SLAC’s new Energy I-Corps Lite, an 8-week entrepreneurial program. Scientists formed three teams, each choosing an example technology, and developed pitches for why a company might want to work with and invest in that technology. The program teaches scientists to think more broadly about a technology and to develop partnerships outside the laboratory. The SLAC program is a local version of DOE’s highly competitive Energy I-Corps program for members of all national labs, and we’re very happy that two of our researchers have recently also been accepted into that program.

Simpkins: Another focus is on training that introduces our researchers to intellectual property. What is a patent? What are copyrights? What is open source software? What value does a scientist get out of submitting an invention disclosure? This sort of education is very important because some researchers think that protecting intellectual property is a restriction or limitation, while, in reality, it opens up more possibilities for partnerships and funding. When a scientist participates in the tech transfer process, they establish themselves as somebody who not only generates scientific publications, but as someone who contributes to the valuable patent and licensing output from the labs, which is part of the job creation process in the U.S.

What future prospects are you most excited about?

Garrett: SLAC is a place with a lot of innovation, and one of my goals is to get more scientists excited about and engaged with technology transfer. Creating educational opportunities is one way of approaching that; another one is rolling out incentives for folks who participate, like a tech transfer awards program. I’m looking forward to working with every scientist who has an interest in engaging with companies and helping them develop a strategic plan for their idea. What exactly is the technology space you’re working in and who exactly do you want to engage with? That’s the most exciting thing for me. I basically want to get companies and people from SLAC into the room together and get these conversations going, and usually what comes from these engagements are pretty awesome things. 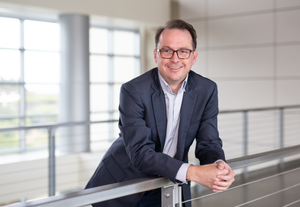 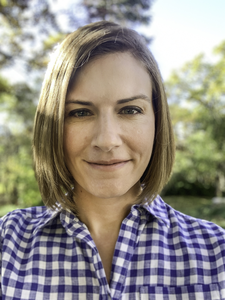