SAN FRANCISCO, CA (March 8, 2022) — Though there are hundreds of species of fish found off the coast of the Maldives, a mesmerizing new addition is the first-ever to be formally described—the scientific process an organism goes through to be recognized as a new species—by a Maldivian researcher. The new-to-science Rose-Veiled Fairy Wrasse (Cirrhilabrus finifenmaa), described today in the journal ZooKeys, is also one of the first species to have its name derived from the local Dhivehi language, ‘finifenmaa’ meaning ‘rose’, a nod to both its pink hues and the island nation’s national flower. Scientists from the California Academy of Sciences, the University of Sydney, the Maldives Marine Research Institute (MMRI), and the Field Museum collaborated on the discovery as part of the Academy’s Hope for Reefs initiative aimed at better understanding and protecting coral reefs around the world.

“It has always been foreign scientists who have described species found in the Maldives without much involvement from local scientists, even those that are endemic to the Maldives,” says study co-author and Maldives Marine Research Institute biologist Ahmed Najeeb. “This time it is different and getting to be part of something for the first time has been really exciting, especially having the opportunity to work alongside top ichthyologists on such an elegant and beautiful species.”

First collected by researchers in the 1990s, C. finifenmaa was originally thought to be the adult version of a different species, Cirrhilabrus rubrisquamis, which had been described based on a single juvenile specimen from the Chagos Archipelago, an island chain 1,000 kilometers (621 miles) south of the Maldives.

In this new study, however, the researchers took a more detailed look at both adults and juveniles of the multicolored marvel, measuring and counting various features, such as the color of adult males, the height of each spine supporting the fin on the fish’s back and the number of scales found on various body regions. These data, along with genetic analyses, were then compared to the C. rubrisquamis specimen to confirm that C. finifenmaa is indeed a unique species.

Importantly, this revelation greatly reduces the known range of each wrasse, a crucial consideration when setting conservation priorities.

“What we previously thought was one widespread species of fish, is actually two different species, each with a potentially much more restricted distribution,” says lead author and University of Sydney doctoral student Yi-Kai Tea. “This exemplifies why describing new species, and taxonomy in general, is important for conservation and biodiversity management.”

Despite only just being described, the researchers say that the Rose-Veiled Fairy Wrasse is already being exploited through the aquarium hobbyist trade.

“Though the species is quite abundant and therefore not currently at a high risk of overexploitation, it’s still unsettling when a fish is already being commercialized before it even has a scientific name,” says senior author and Academy Curator of Ichthyology Luiz Rocha, PhD, who co-directs the Hope for Reefs initiative. “It speaks to how much biodiversity there is still left to be described from coral reef ecosystems.”

Last month, Hope for Reefs researchers continued their collaboration with the MMRI by conducting the first surveys of the Maldives’ ‘twilight zone’ reefs—the virtually unexplored coral ecosystems found between 50- to 150-meters (160- to 500-feet) beneath the ocean’s surface—where they found new records of C. finifenmaa along with at least eight potentially new-to-science species yet to be described.

For the researchers, this kind of international partnership is pivotal to best understand and ensure a regenerative future for the Maldives’ coral reefs.

“Nobody knows these waters better than the Maldivian people,” Rocha says. “Our research is stronger when it’s done in collaboration with local researchers and divers. I’m excited to continue our relationship with MMRI and the Ministry of Fisheries to learn about and protect the island nation’s reefs together.”

“Collaborating with organizations such as the Academy helps us build our local capacity to expand knowledge in this field. This is just the start and we are already working together on future projects,” Najeeb says. “Our partnership will help us better understand the unexplored depths of our marine ecosystems and their inhabitants. The more we understand and the more compelling scientific evidence we can gather, the better we can protect them.”

About the California Academy of Sciences
The California Academy of Sciences is a renowned scientific and educational institution with a mission to regenerate the natural world through science, learning, and collaboration. Based in San Francisco’s Golden Gate Park, it is home to a world-class aquarium, planetarium, and natural history museum, as well as innovative programs in scientific research and environmental education—all under one living roof. Museum hours are 9:30 am – 5:00 pm Monday – Saturday, and 11:00 am – 5:00 pm on Sunday. Admission includes all exhibits, programs, and shows. For daily ticket prices, please visit www.calacademy.org or call (415) 379-8000 for more information.

About Research at the California Academy of Sciences
The Institute for Biodiversity Science and Sustainability at the California Academy of Sciences is at the forefront of efforts to regenerate the natural world through science, learning, and collaboration. Based in San Francisco, the Institute is home to more than 100 world-class scientists, state-of-the-art facilities, and nearly 46 million scientific specimens from around the world. The Institute also leverages the expertise and efforts of more than 100 international Associates and 450 distinguished Fellows. Through expeditions around the globe, investigations in the lab, and analysis of vast biological datasets, the Institute’s scientists work to understand the evolution and interconnectedness of organisms and ecosystems, the threats they face around the world, and the most effective strategies for ensuring they thrive into the future. Through deeply collaborative partnerships and innovative public engagement initiatives, they also guide critical conservation decisions worldwide, inspire and mentor the next generation of scientists, and foster responsible stewardship of our planet.

Cirrhilabrus finifenmaa (Teleostei, Labridae), a new species of fairy wrasse from the Maldives, with comments on the taxonomic identity of C. rubrisquamis and C. wakanda 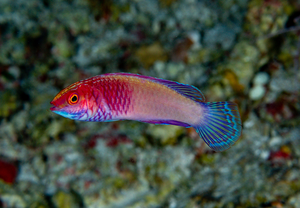 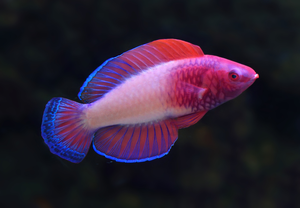