Earth’s thin crust softens considerably when it dives down into the Earth attached to a tectonic plate. That is demonstrated by X-ray studies carried out using DESY’s X-ray source PETRA III on a mineral which occurs in large quantities in basaltic crust. This softening can even cause the crust to peel away from the underlying plate, as an international team led by Hauke Marquardt from the University of Oxford reports in the scientific journal Nature. The delaminated crust has different physical properties from the rest of the mantle, which may explain anomalies in the speed with which seismic waves propagate through the mantle.

For the first time, the scientists have managed to measure the deformation of the mineral davemaoite under the conditions that prevail inside the Earth’s mantle. “Davemaoite belongs to the widespread group of materials known as perovskites, but it is only formed from other minerals at depths of about 550 kilometres and beyond, due to the increasing pressure and temperature,” explains lead author Julia Immoor from the Bavarian Research Institute of Experimental Geochemistry and Geophysics at the University of Bayreuth. The existence of the mineral had been predicted for decades, but it was not until 2021 that a natural sample of it was found. Davemaoite differs from other perovskites in its cubic crystal structure, among other things. At great enough depths, it can account for about a quarter of the descending basaltic oceanic crust.

Using a special apparatus at DESY’s Extreme Conditions Beamline (P02.2) at PETRA III, the team has now succeeded in artificially producing davemaoite and examining it with X-rays. To do this, the scientists heated finely ground wollastonite (CaSiO3) to around 900 degrees Celsius at high pressure, until davemaoite was formed. The mineral was then deformed by applying an increasing pressure of up to 57 gigapascals – around 570,000 times atmospheric pressure at sea level – and examined using X-rays. These parameters correspond to the conditions encountered at depths of up to 1300 kilometres.

“Our measurements show that davemaoite is surprisingly soft within Earth’s lower mantle,” reports Hauke Marquardt, who led the research. “This observation completely changes our ideas about the dynamic behaviour of subducting slabs in the lower mantle.” The dynamics in these so-called subduction zones, where one tectonic plate dives underneath another, depend very much on how hard the minerals present are. Being surprisingly soft, davemaoite can cause the descending crust to detach from the underlying plate, whereby the subduction process then proceeds separately for the crust and the remaining plate.

Scientists have long speculated about such a detachment because the separated crust could cause the characteristic changes in the velocities of seismic waves that are observed at different depths. Until now, however, it has been unclear what causes could lead to such a delamination. “I am glad that the experimental setup we have come up with here is able to help solve important questions linked to processes occurring deep inside our planet,” says DESY’s Hanns-Peter Liermann, who is in charge of the Extreme Conditions Beamline at PETRA III and a co-author of the study.

Researchers from the Universities of Bayreuth, Oxford and Utah, as well as from the GFZ German Research Centre for Geosciences in Potsdam, the California Institute of Technology and DESY were involved in the study. The project was funded in part by Deutsche Forschungsgemeinschaft DFG. 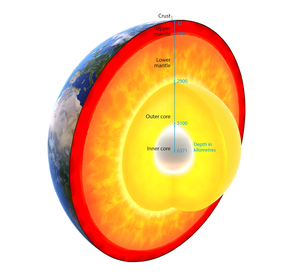 View into the Earth's interior