Perovskite solar cells have emerged as the fastest growing alternative to the conventional silicon technology that dominates the photovoltaic market. Cheaper and easier to manufacture, they have shown a dramatic continual rise in performance, potentially surpassing their silicon-based equivalents. However, inherent surface defects and ion migration affect the stability of the light-responsive perovskite film, a phenomenon that becomes more pronounced at higher temperatures.

Sandwiched between charge carrier-selective materials, the three-dimensional (3D) perovskite film converts light to electricity by creating pairs of electrons and positively charged holes. Upon charge separation and collection, electrons migrate toward the "n-type" layer while holes migrate toward the "p-type" layer, producing an electric current.

While this top-contact passivation approach has enhanced the performance and stability of regular solar cells, in which the p-type layer is at the top, so far it has failed for inverted devices, where the n-type layer is at the top. "External conditions are not an issue for a sealed device but the intrinsic thermal instability of the perovskite film remains problematic," explains lead author, Randi Azmi from Stefaan De Wolf’s group.

Taking this approach further, Azmi, De Wolf and coworkers discovered that tailoring the number of inorganic sheets, or dimensionality, of the 2D perovskite component was crucial for an effective top-contact passivation.

The researchers generated heterojunctions containing 2D perovskites of varying dimensionalities at the n-type interface of inverted solar cells. They deposited the cation precursor oleylammonium iodide on the 3D film to grow the 2D layer in situ and allowed it to self-organize at room temperature overnight.

Heterojunctions involving 2D perovskites were shown to substantially increase the device performance and stability when they had a dimensionality of two. The devices delivered a power conversion efficiency of 24.3 percent. They also retained more than 95 percent of their initial value after more than 1,000 hours under accelerated high-humidity high-temperature test conditions, meeting a critical industrial stability standard for photovoltaic modules.

"The team is now designing new molecules for 2D perovskites to develop ultrastable inverted perovskite solar cells with efficiencies close to those of regular devices that exceed 25 percent," Azmi says.

A tailored coat to beat the heat 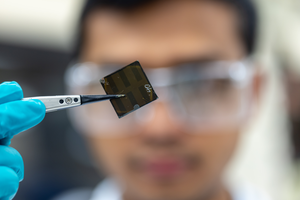