A Korean research team has unveiled a core technology which reduces the time and cost invested in developing artificial intelligence (AI) chips in small and medium-sized enterprises and startups. Thanks to the development of system software that solved the problems of compatibility and scalability between hardware and software which have been obstacles in the past, the development of AI chips is also expected to accelerate.

Electronics and Telecommunications Research Institute(ETRI) has developed an AI core software, Deep Learning Compiler 'NEST-C1)'. It was released on the web (Github2)) along with the internally developed AI chip hardware so that developers can use it easily.

As AI technology develops, deep learning application services are expanding into various fields. As the AI algorithm to implement this service becomes more complex, the necessity for better and more efficient arithmetic processing has increased.

ETRI resolved this problem by defining a common intermediate representation3) suitable for AI applications to apply it to the nest compiler. By resolving the heterogeneity between AI applications and AI chips, AI chip development becomes easier. This technology was also established as a standard of the Telecommunications Technology Association (TTA4)).

Instead of CPU or GPU, Neural Processing Unit (NPU) AI chip specializing in AI computation processing is drawing more attention. In order to run applications such as autonomous driving, Internet of Things (IoT), and sensors, optimized AI chips to each application must be designed.

At the same time, an optimized compiler5) must produce accurate execution code for each application to achieve optimal performance. It is because Deep Learning Compiler, core system software that guarantees the inference performance of deep learning models, is important. It acts as a bridge between hardware and application software.

In general, manufacturers develop this tool along with AI chip and system software6) for sale. So far, SMEs and Startups have difficulty in focusing their capabilities on chip design. It is because a considerable amount of time needs to be devoted to developing and optimizing system software and application. System software supplied by a large manufacturer is optimized to its own chip, and there is a limitation to its application as it is developed privately.

Especially, there is an inconvenience of developing different compilers depending on the chip type and AI application. There has been a limitation on inter-compatibility and extensibility into new areas.

This development will make it possible to shorten the time for developing applications and their optimization. It is also related to reducing the cost of chip production and sales. It is compatible with NPU processors as well as CPU and GPU.

Its difference becomes even more significant when it supports more types of AI applications and chips. It was necessary to develop as many compilers as ‘deep learning platform type and chip type’ in the past, but it became possible to replace the compilers with one highly versatile nest compiler now.

The research team announced that this disclosure is significant in that Nest Compiler can play a pivotal role in the current AI chip ecosystem where development is fragmented.

ETRI also applied Nest Compiler to the high-performance AI chips which were internally developed by a Korean AI chip startup. ETRI plans to expand the scope of supporting deep learning compilers by collaborating with related companies, and it is also promoting the commercialization of AI chip application services through specialized software companies. Moreover, ETRI plans to contribute to creating new services by improving the performance and convenience required for developing AI application services.

ETRI is a non-profit government-funded research institute. Since its foundation in 1976, ETRI, a global ICT research institute, has been making its immense effort to provide Korea a remarkable growth in the field of ICT industry. ETRI delivers Korea as one of the top ICT nations in the World, by unceasingly developing world’s first and best technologies.

This technology was developed with the assistance of the Ministry of Science and ICT.

1) NEST-C : AI compiler which receives deep learning models in the format of ONNX, Pytorch, and Caffe2 to generate executable codes targeting NPU, CPU, and GPU
2) Github URL : https://github.com/etri/nest-compiler
3) Intermediate Representation: A unique internal form of representation when the compiler converts executable code into machine code. Intermediate Representation is designed for additional processing, such as optimization and transformation.
4) TTAK.KO.11.0290, Intermediate Representation for Efficient Neural Network Inference in the embedded system with neural
5) A tool of translating human-entered programming language into a machine-understandable language
6) A program which helps a user's computer usage, as a terminology in the same level of application software.  System software is to be provided by the manufacturer of computer hardware. The OS and compiler are typical examples, and it supports running and developing applications 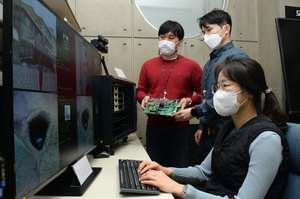