Researchers provide the first plausible explanation to why one of the most massive black hole pairs observed to date by gravitational waves also seemed to merge on a non-circular orbit. Their suggested solution, now published in Nature, involves a chaotic triple drama inside a giant disk of gas around a super massive black hole in a galaxy far, far away.

Black holes are one of the most fascinating objects in the Universe, but our knowledge of them is still limited - especially because they do not emit any light. Up until a few years ago, light was our main source of knowledge about our universe and its black holes, until the Laser Interferometer Gravitational Wave Observatory (LIGO) in 2015 made its breakthrough observation of gravitational waves from the merger of two black holes.

“But how and where in our Universe do such black holes form and merge? Does it happen when nearby stars collapse and both turn into black holes, is it through close chance encounters in star clusters, or is it something else? These are some of the key questions in the new era of Gravitational Wave Astrophysics,” says Assist. Prof. Johan Samsing from the Niels Bohr Institute at the University of Copenhagen, lead author of the paper.

He and his collaborators may have now provided a new piece to the puzzle, which possibly solves the last part of a mystery that astrophysicists have struggled with for the past few years.

The mystery dates back to 2019, when an unexpected discovery of gravitational waves was made by the  LIGO and Virgo observatories. The event named GW190521 is understood to be the merger of two black holes, which not only were heavier than previously thought physically possible, but had in addition produced a flash of light.

Possible explanations have since been provided for these two characteristics, but the gravitational waves also revealed a third astonishing feature of this event - namely that the black holes did not orbit each other along a circle in the moments before merging.

“The gravitational wave event GW190521 is the most surprising discovery to date. The black holes’ masses and spins were already surprising, but even more surprising was that they appeared not to have a circular orbit leading up to the merger,” says co-author Imre Bartos, Prof. at the University of Florida.

But why is a non-circular orbit so unusual and unexpected?

“This is because of the fundamental nature of the gravitational waves emitted, which not only brings the pair of black holes closer for them to finally merge but also acts to circularize their orbit.” explains co-author Zoltan Haiman, a Professor at Columbia University.

This observation made many people around the world, including Johan Samsing in Copenhagen, wonder,

“It made me start thinking about how such non-circular (known as “eccentric”) mergers can happen with the surprisingly high probability as the observation suggests,” says Johan Samsing.

It Takes Three to Tango

A possible answer would be found in the harsh environment in the centers of galaxies harboring a giant black hole millions of times the mass of the Sun surrounded by a flat, rotating disk of gas.

“In these environments the typical velocity and density of black holes is so high that smaller black holes bounce around as in a giant game of billiards and wide circular binaries cannot exist,” points out co-author Prof. Bence Kocsis from the University of Oxford.

But as the group further argued, a giant black hole is not enough,

“New studies show that the gas disk plays an important role in capturing smaller black holes, which over time move closer to the center and also closer to one other. This not only implies they meet and form pairs, but also that such a pair might interact with another, third, black hole, often leading to a chaotic tango with three black holes flying around, ” explains astrophysicist Hiromichi Tagawa from Tohoku University,  co-author of the study.

However, all previous studies up to observation of GW190521 indicated that forming eccentric black hole mergers is relatively rare. This naturally brings up the question: Why did the already unusual gravitational wave source GW190521 also merge on an eccentric orbit?

Everything that has been calculated so far was based on the notion that the black hole interactions are taking place in three dimensions, as expected in the majority of stellar systems considered so far.

“But then we started thinking about what would happen if the black hole interactions were instead to take place in a flat disk, which is closer to a two-dimensional environment. Surprisingly, we found in this limit that the probability of forming an eccentric merger increases by as much as a 100 times, which leads to about half of all black hole mergers in such disks possibly being eccentric,” says Johan Samsing and continues:

“And that discovery fits incredibly well with the observation in 2019, which all in all now points in the direction that the otherwise spectacular properties of this source are not so strange again, if it was created in a flat gas disk surrounding a super massive black hole in a galactic nucleus.”

This possible solution also adds to a century-old problem in mechanics,

“The interaction between 3 objects is one of the oldest problems in physics, which both Newton, myself, and others have intensely studied. That this now seems to play a crucial role in how black holes merge in some of the most extreme places of our Universe is incredibly fascinating ”, says co-author Nathan W. Leigh, Prof. at Universidad de Concepción, Chile.

The theory of the gas disk also fits with other researchers' explanations of the other two puzzling properties of GW190521. The large masses of the black hole have been reached by successive mergers inside the disk, while the emission of light could originate from the ambient gas.

“We have now shown that there can be a huge difference in the signals emitted from black holes that merge in flat, two-dimensional disks, versus those we often consider in three-dimensional stellar systems,  which tells us that we now have an extra tool that we can use to learn about how black holes are created and merge in our Universe, ” says Johan Samsing.

But this study is only the beginning,

“People have been working on understanding the structure of such gas disks for many years, but the problem is difficult. Our results are sensitive to how flat the disk is, and how the black holes move around in it. Time will tell whether we will learn more about these disks, once we have a larger population of black hole mergers, including more unusual cases similar to GW190521. To enable this, we must build on our now published discovery, and see where it leads us in this new and exciting field” concludes co-author Zoltan Haiman.

Black hole billiards in the centers of galaxies 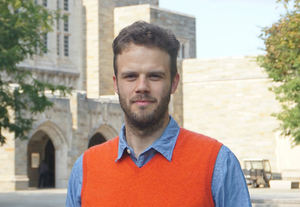