Oak Ridge National Laboratory scientist Amy Elliott is one of 120 women featured in a new exhibit, IfThenSheCan, at the Smithsonian to commemorate Women's History Month. A life-size 3D printed statue of Elliott, a manufacturing scientist, is now on display in the Smithsonian Castle in Washington, D.C., through March 27. The statues recognize women who have excelled in the fields of science, technology, engineering and mathematics, or STEM, and is the largest collection of women statues ever assembled.

Elliott, who leads ORNL’s robotics and intelligent systems group, specializes in the inkjet-based 3D printing of metals and ceramics, a technology designed to enhance and transform advanced manufacturing in the automotive, aerospace and power generating sectors. Her inventions have been licensed by industry and have won prestigious awards including two R&D 100 Awards. She also holds several patents and licenses including a method for 3D metal printing and additive manufacturing of aluminum boron carbide metal composites.

“As a 3D printing researcher, it was so cool to get 3D scanned for the statue and printed while expecting my first child,” Elliott said. “I love being a STEM mom and feel so honored to be part of history and the IFThenSheCan exhibit.”

Elliott met with Secretary of Energy Jennifer Granholm, DOE Under Secretary for Science and Innovation Geri Richmond and National Nuclear Security Administrator Jill Hruby, who toured the statues during the exhibit’s opening weekend.

In addition to the IfThenSheCan honor, Elliott was named one of the top 20 women in robotics from the Society of Manufacturing Engineers; was awarded the 2021 Tennessee Valley YWCA Tribute to Women Award in the category of science, technology and environment; and was named to the 40 Under 40 Knox.biz class, recognizing industry innovators.

Elliott has appeared on Discovery Channel’s reality TV show The Big Brain Theory, where she placed second out of 10 contestants. She was recruited by the Science Channel to co-host Outrageous Acts of Science and has traveled the world to co-host the RoboNation TV web series. Most recently, her work was featured on a segment of CBS’ Mission Unstoppable.

A native of Fayetteville, Tennessee, Elliott earned her doctorate from Virginia Tech, where she was project lead for the world’s first 3D-printing vending machine, the DreamVendor. She joined ORNL in 2013 as a researcher working in the Department of Energy’s Manufacturing Demonstration Facility at ORNL.

UT-Battelle manages ORNL for the Department of Energy’s Office of Science, the single largest supporter of basic research in the physical sciences in the United States. DOE’s Office of Science is working to address some of the most pressing challenges of our time. For more information, please visit energy.gov/science. – Jennifer Burke 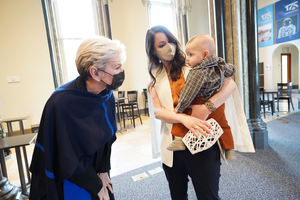