New UC Riverside research shows how, after it rains, microbes in desert soil convert one form of pollution into another — laughing gas.

No laughing matter, nitrous oxide or N2O is the third most potent greenhouse gas. Scientists conducting the research were surprised to measure N2O production in the desert heat.

“It only happens in waterlogged soils. Since the desert is dry most of the year, we didn’t think this process could occur in arid soils,” said Alex Krichels, UCR environmental scientist and first author on the new study.

This study, published in the journal Biogeochemistry, examines how and why desert-dwelling bacteria are producing N2O emissions. It builds on work published in 2020, when a team led by UCR landscape ecologist Darrel Jenerette found desert soils produce substantial amounts of N2O after a rain.

The traditional view, Krichels explained, is that N2O comes from heavily fertilized agricultural fields like those in the Midwest. Growers add more nitrogen, ammonium and nitrates than plants need, and after a rain, bacteria convert the excess into N2O, a process called denitrification.

“This is a strategy for the bacteria to survive after a ton of water is added and there’s no oxygen for them in the soil,” Krichels said. “When that happens, instead of oxygen they use nitrate, and breathe out nitrous oxide, a process called denitrification.”

Unlike fertilization in agricultural fields, denitrification in deserts may have a different source of nitrate. “Nitrate pollution in deserts originates from fossil fuel combustion, not fertilization,” Krichels said. “Combustion releases pollution that hangs around, gets deposited into soils over time, and re-emerges after a rain as N2O.”

Automobiles or industrial processes send a few different forms of nitrogen into the atmosphere. “Combined, they’re called NOx, and they can produce tropospheric ozone, which is bad for your lungs and is also a greenhouse gas. It is not to be confused with good ozone higher up in the stratosphere that protects us from UV rays,” explained Peter Homyak, UCR environmental scientist and paper co-author.

To determine if fossil fuel byproducts could drive the desert denitrification, the researchers picked two Southern California sites in the University of California Natural Reserve System. They used a box “resembling a coffin,” Krichels said, with instruments to measure the chemical composition of air emerging from the soil after the addition of nitrate.

The box also contained an air conditioning unit, as temperatures often reached 120 degrees. “Temperatures much higher than 100 degrees Fahrenheit are thought to prevent microbial processes. Given the heat at our sites, it was surprising to see so much N2O,” Krichels said.

Krichels, who previously studied similar processes in Illinois cornfields, said what emerges from deserts after rains is 10 times higher than anything he saw in the Midwest. “The rates of emission are really high, but short lived,” he said. “This only occurs when water is added to dry soils.”

Much evidence suggests droughts are becoming more common globally, and that these droughts will be punctuated by large rain events. Since droughts dry out soil, these climate changes will make drying and wetting cycles more common and increase the likelihood that these processes will become more important sources of greenhouse gas.

Moving forward the researchers will replicate the study with sites in Riverside and Joshua Tree, to measure whether proximity to cities increases post-rain nitrous oxide emissions from soils.

“On a broader scale, a lot of people don’t know these processes happen in soils in general, or that the nitrogen humans add to the atmosphere can end up affecting climate change and human health in this way,” Krichels said. “There’s a lot of life in these soils, and it can affect the entire globe.” 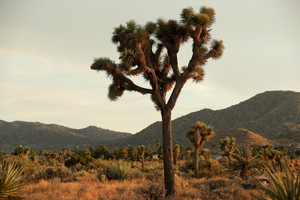