A new study from MBARI researchers and their collaborators is the first to document how the thawing of permafrost, submerged underwater at the edge of the Arctic Ocean, is affecting the seafloor. The study was published in the Proceedings of the National Academy of Sciences on March 14, 2022.

Numerous peer-reviewed studies show that thawing permafrost creates unstable land which negatively impacts important Arctic infrastructure, such as roads, train tracks, buildings, and airports. This infrastructure is expensive to repair, and the impacts and costs are expected to continue increasing.

Using advanced underwater mapping technology, MBARI researchers and their collaborators revealed that dramatic changes are happening to the seafloor as a result of thawing permafrost. In some areas, deep sinkholes have formed, some larger than a city block of six-story buildings. In other areas, ice-filled hills called pingos have risen from the seafloor.

“We know that big changes are happening across the Arctic landscape, but this is the first time we’ve been able to deploy technology to see that changes are happening offshore too,” said Charlie Paull, a geologist at MBARI and one of the lead authors of the study. “This groundbreaking research has revealed how the thawing of submarine permafrost can be detected, and then monitored once baselines are established.”

While the degradation of terrestrial Arctic permafrost is attributed in part to increases in mean annual temperature from human-driven climate change, the changes the research team has documented on the seafloor associated with submarine permafrost derive from much older, slower climatic shifts related to our emergence from the last ice age. Similar changes appear to have been happening along the seaward edge of the former permafrost for thousands of years.

“There isn’t a lot of long-term data for the seafloor temperature in this region, but the data we do have aren’t showing a warming trend. The changes to seafloor terrain are instead being driven by heat carried in slowly moving groundwater systems,” explained Paull.

“This research was made possible through international collaboration over the past decade that has provided access to modern marine research platforms such as MBARI’s autonomous robotic technology and icebreakers operated by the Canadian Coast Guard and the Korean Polar Research Institute,” said Scott Dallimore, a research scientist with the Geological Survey of Canada, Natural Resources Canada, who led the study with Paull. “The Government of Canada and the Inuvialuit people who live on the coast of the Beaufort Sea highly value this research as the complex processes described have implications for the assessment of geohazards, creation of unique marine habitat, and our understanding of biogeochemical processes.”

Background
The Canadian Beaufort Sea, a remote area of the Arctic, has only recently become accessible to scientists as climate change drives the retreat of sea ice.

Since 2003, MBARI has been part of an international collaboration to study the seafloor of the Canadian Beaufort Sea with the Geological Survey of Canada, the Department of Fisheries and Oceans Canada, and since 2013, with the Korean Polar Research Institute.

MBARI used autonomous underwater vehicles (AUVs) and ship-based sonar to map the bathymetry of the seafloor down to a resolution of a one-meter square grid, or roughly the size of a dinner table.

Paull and the team of researchers will return to the Arctic this summer aboard the R/V Araon, a Korean icebreaker. This trip with MBARI’s long-time Canadian and Korean collaborators—along with the addition of the United States Naval Research Laboratory—will help refine our understanding of the decay of submarine permafrost.

Support for this work was provided by the David and Lucile Packard Foundation, Geological Survey of Canada, Fisheries and Oceans Canada, and the Korean Ministry of Ocean and Fisheries (KIMST grant No. 1525011795).

About MBARI
MBARI (Monterey Bay Aquarium Research Institute) is a private non-profit oceanographic research center, founded by David Packard in 1987. The mission of MBARI is to advance marine science and technology to understand a changing ocean. Learn more at mbari.org. 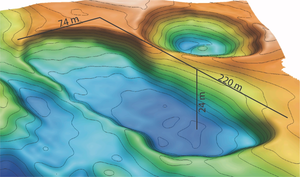