A tiny rodent trims tall grasses so it can watch the skies for flying predators, new research shows.

Brandt’s voles live in grassland in Inner Mongolia, China, where they are hunted by birds called shrikes.

The new study – by the Institute of Zoology, Chinese Academy of Sciences; Northeast Normal University of China and the universities of Exeter and Florida – found that the voles cut tall bunchgrass when shrikes are nearby.

The voles don't eat or use the bunchgrass – they cut it to keep themselves safe, an example of "ecosystem engineering".

"When shrikes were present, the voles dramatically decreased the volume of bunchgrass," said Dr Dirk Sanders, of the Environment and Sustainability Institute on Exeter's Penryn Campus in Cornwall.

"This led to fewer visits from shrikes – which apparently recognise cut-grass areas as poor hunting grounds.

"An activity like this is costly for the voles in terms of energy, so there must be high 'selection pressure' to do it – cutting the grass must significantly improve their chances of survival."

The researchers also tested the impact of keeping birds away, by putting up nets over certain areas.

With no shrikes overhead, the voles stopped cutting the bunchgrass.

"We sometimes underestimate the ability of wild animals to react to changes in their environment," Dr Sanders said.

"In this case, the voles were able to change their behaviour in response to the removal of predators."

He added: "Our findings are a reminder that species show remarkable adaptations. It also underlines that the loss of even a single species in a food web can result in unexpected changes to an entire habitat."

"This study provides a good example that animals can actively modify their habitat to reduce predation risk," said Dr Zhibin Zhang, from the State Key Laboratory of Integrated Management of Pest Insects and Rodents, Institute of Zoology, Chinese Academy of Sciences.

Dr Zhiwei Zhong, from Northeast Normal University, added: "The finding would have some implications in rodent management in pasture land. Keeping or planting these large bunchgrasses may help to attract shrikes, and then to reduce the population density of voles”.

The paper, published in the journal Current Biology, is entitled: "A rodent herbivore reduces its predation risk." 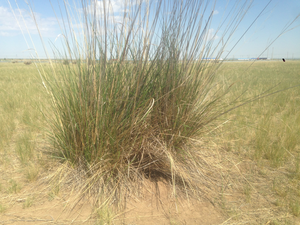