To prevent the extinction of the northern white rhino, the international consortium BioRescue is attempting to create artificial egg cells from stem cells. A team led by MDC’s Sebastian Diecke and Micha Drukker of Leiden University has now revealed in Scientific Reports that they are one step closer to achieving this goal.

Fatu and Najin are the last two northern white rhinos in the world – and they are both female. As a result, this subspecies can no longer reproduce naturally, and extinction seems inevitable. However, the BioRescue consortium is working against the clock to ensure that the northern white rhino does not disappear from our planet forever. The researchers are pursuing a two-pronged approach: First, they are developing advanced assisted reproduction techniques; second, they want to use skin cells taken from the northern white rhinoceros to create induced pluripotent stem (iPS) cells in the lab, which can eventually develop into immature egg cells, or oocytes. The team from the Max Delbrück Center for Molecular Medicine in the Helmholtz Association (MDC), together with partners in Munich, the Netherlands and Japan, has now taken a major step towards this goal. In the journal Scientific Reports, they reveal that they have managed to obtain and conduct in-depth studies on pluripotent rhino stem cells. “Our paper sheds new light on pluripotency – the ability of stem cells to differentiate into all cells of the body,” says lead author Dr. Vera Zywitza of the Pluripotent Stem Cells Platform at the MDC, which is led by Dr. Sebastian Diecke. “It therefore represents an important milestone on the road to artificially generated rhino oocytes.”

The BioRescue project has received €4 million in funding from the German Federal Ministry of Education and Research (BMBF). The international consortium, which includes the MDC, is led by the Leibniz Institute for Zoo and Wildlife Research (IZW) and cooperates with many more partners, including Helmholtz Zentrum München in Germany.

The fine art of cell engineering

iPS cells in a petri dish have the potential to develop into any cells of the body – including the primordial germ cells that the BioRescue scientists want to cultivate. The researchers are working closely with the lab of Professor Katsuhiko Hayashi, a Japanese stem cell researcher at Kyushu University. In 2016, Hayashi succeeded in generating egg cells from the skin of mice, artificially fertilizing these cells, and implanting them in females. The mice conceived by this method were born healthy and fertile.

Stem cell researcher Professor Micha Drukker and his teams at Helmholtz Zentrum München and at Leiden Academic Centre for Drug Reserach at Leiden University used a process known as episomal reprogramming to successfully produce northern white rhino iPS cells. This involved the researchers introducing foreign DNA molecules called “plasmids” into skin cells they had obtained. These plasmids contained genes to reprogram the skin cells into iPS cells. The rhino stem cells generated in this way are remarkably similar to their human equivalent. “Viewed under the microscope, they are barely distinguishable from human iPS cells,” says Drukker, adding: “They also respond very similarly to external influences.”

iPS cells have different states: they can be naïve – the “ground state” of pluripotency – or primed. Cells in the latter state are thought to have reached a slightly more advanced stage of embryonic development. Experiments with stem cells generated from mice show that they are particularly good at producing germline cells when converting from the primed to the naïve-like state. However, when the scientists first attempted to convert the rhino cells to a naïve-like state, the cells died. The researchers therefore introduced a gene into the rhino cells that prevents cell death – and with this, they successfully obtained naïve iPS cells. “We have characterized the cells in detail by, among other things, analyzing transcriptome data,” Zywitza explains. “The successful conversion to a naïve-like state of pluripotency is a promising starting point for generating germline cells.”

Nevertheless, Zywitza and her colleagues cannot yet move onto the next stage. “The iPS cells we have cultivated contain persistent foreign genetic material – namely, the reprogramming factors and the gene that prevents cell death,” Zywitza explains. “This means we can’t use them to make germ cells, as there is a risk these would be pathologically altered.” But these cells are still extremely useful for studying rhino stem cells in general and gaining a better understanding of their different states in specific. With their help, scientists can explore the molecular mechanisms that take place in stem cells. “For example, we can study why the gestation period of a rhinoceros is 16 months whereas that of a mouse is only 21 days, or how organs develop in different species,” the scientist explains. This teaches us a lot about evolution.”

Ovarian tissue is needed too

In the meantime, Diecke’s team has generated further iPS cells. They used RNA viruses instead of plasmids to introduce the reprogramming factors. These new iPS cells do not contain anything that does not belong there. Now the scientists are trying to produce primordial germ cells from them.

Meanwhile, progress is also being made with assisted reproduction. In January of this year, scientists at IZW, in collaboration with the Kenya Wildlife Service, the Wildlife Research and Training Institute, the Dvůr Králové Safari Park, and Ol Pejeta Conservancy, collected immature egg cells called oocytes from Fatu. These were matured at Avantea’s laboratories in Italy and inseminated with thawed sperm from a deceased bull. There are now a total of 14 northern white rhino embryos, which are stored in liquid nitrogen at minus 196 degrees Celsius. In the near future the embryos will be implanted into southern white rhino surrogates, with the aim of creating a healthy northern white rhino calf.

The production of 14 embryos represents a great success in reproductive biology, but this is not a large amount if the goal is to rebuild the northern white population to a self-sustaining level. “Najin and Fatu are also closely related and their genetic makeup is largely identical,” says Professor Thomas Hildebrandt of IZW, who leads the BioRescue research consortium. “Due to age and reproductive tract issues, we were unable to collect any oocytes from Najin that could be developed into embryos, so all 14 embryos are from Fatu. We therefore urgently need a complementary strategy for creating gametes – eggs and sperm – from significantly more individuals.”

Protecting the world’s species – before it’s too late

“Generating functional eggs of the northern white rhinoceros would be the crowning achievement of our research,” Diecke says. This approach could serve as a model for other endangered species. If reproduction from stem cells works, the technique could be used to revive many more threatened or already extinct species. More than 10,000 living cell cultures from more than 1,000 endangered species are stored in the Frozen Zoo at the Arnold and Mabel Beckman Center for Conservation Research in San Diego and in IZW’s biobank in Berlin. “This invaluable resource could be used to bring back species from the brink of extinction,” Diecke says. The northern white rhino would then be just the beginning – although he adds that he “would rather we never had to use our technique and did more to preserve species before it was too late.”

But for Zywitza, one thing is certain: If a northern white rhino is born someday thanks to stem cell technologies, she would love to meet it.

The Max Delbrück Center for Molecular Medicine in the Helmholtz Association (MDC) is one of the world’s leading biomedical research institutions. Max Delbrück, a Berlin native, was a Nobel laureate and one of the founders of molecular biology. At the MDC’s locations in Berlin-Buch and Mitte, researchers from some 60 countries analyze the human system – investigating the biological foundations of life from its most elementary building blocks to systems-wide mechanisms. By understanding what regulates or disrupts the dynamic equilibrium in a cell, an organ, or the entire body, we can prevent diseases, diagnose them earlier, and stop their progression with tailored therapies. Patients should benefit as soon as possible from basic research discoveries. The MDC therefore supports spin-off creation and participates in collaborative networks. It works in close partnership with Charité – Universitätsmedizin Berlin in the jointly run Experimental and Clinical Research Center (ECRC), the Berlin Institute of Health (BIH) at Charité, and the German Center for Cardiovascular Research (DZHK). Founded in 1992, the MDC today employs 1,600 people and is funded 90 percent by the German federal government and 10 percent by the State of Berlin. www.mdc-berlin.de 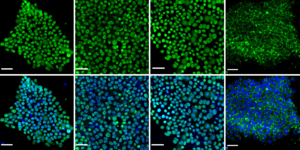 Stem cells in an undifferentiated state