It is well-known that chemical vapor deposition is a conventional synthesis method to fabricate large-scale and high-quality two-dimensional materials, such as graphene, hexagonal boron nitride, and transition-metal dichalcogenides. While, for organic films, solution-based methods, such as inkjet printing, spin coating, and drop and micro-contact printing, are commonly used.

Wenqian Yao and He Yang, together with lab director Yunqi Liu and Bin Wu, sought to determine whether insoluble molecules could also be used to prepare films with chemical vapor deposition. They chose three kinds of molecules which were homemade in Yunqi Liu’s group.

The team demonstrate a general method for growing wafer-scale continuous, uniform, and ultrathin (2–5 nm) organic films. This method is based on a copper (Cu) surface-mediated reaction and polymerization of several equivalent bromine (Br)-containing π-conjugated small molecules (C12S3Br6, C24H4O2Br2, and C24H12Br2N4), in which local surface-mediated polymerization and internal π-π interactions among organic molecules are responsible for the dimension and uniformity control of the thin films. Besides, by using different facet of underlying Cu substrates, the growth rate and morphology of thin films were found to be Cu-facet-dependent, and single-crystal Cu(111) surfaces could improve the uniformity of thin films. In addition, the number of Br groups and size of organic molecules were critical for crystallinity and thin-film formation.

It is proposed that this method can be used to fabricate heterostructures, such as organic film/graphene, paving a new way for various functional materials and device applications. 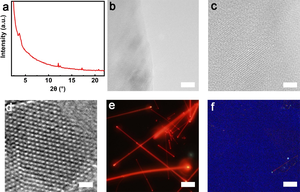 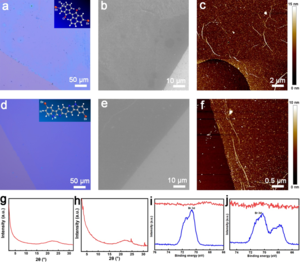