The tectonic plates that form the Earth's surface are like puzzle pieces that are in constant, very slow motion – on average, they move only up to around 10 centimeters a year. But these puzzle pieces don't quite fit together: there are zones on one plate that end up plunging under another – the so-called subduction zones, central to the dynamics of the planet. This movement is slow, but it can lead to moments of great energy release and, over thousands of years, large mountain ranges or marine trenches are formed in these regions.

How do these subduction zones originate, and how do they evolve over time? Geologists already knew that in these zones, on a time scale of thousands of years, this process can stagnate and reverse itself, giving rise to new subduction zones. But it was still necessary to know how this happens, and to include in the models the various (and enormous) forces involved in this process. For the first time, it was possible to simulate in three dimensions one of the most common processes of formation of new subduction zones, ensuring that all forces are dynamically and realistically modeled, including Earth's own gravity.

“Subduction zones are one of the main features of our planet and the main driver of plate tectonics and the global dynamics of the planet. Subduction zones are also the places where earthquakes of great magnitude occur, as is the case of the Pacific Ring of Fire, the largest system of subduction zones in the world. For this reason, it is extremely important to understand how new subduction zones start and how this process takes place”, explains Jaime Almeida, first author of this study, researcher at Instituto Dom Luiz, at Faculty of Sciences of the University of Lisbon (Ciências ULisboa).

Each of the simulations that led to these results took up to a week to process on a supercomputer at the Johannes Gutenberg University (Germany). But it could have taken weeks, or even months, to run on this supercomputer – had it not been for the computational code recent developed at this University, significantly more efficient than other available codes.

“It had already been theoretically proposed that new subduction zones were more likely to form from pre-existing ones, but models of this kind had never been carried out. In a way, it seems to be easier and more likely than anticipated”, explains João Duarte, researcher at Instituto Dom Luiz and co-author of this study, now published in the Communications Earth and Environment journal, from the Nature group.

This model opens up a new range of perspectives and represents the starting point for studying specific regions of our planet: “We are now applying these models to specific cases, such as the subduction zones that are starting in the Atlantic Ocean, in the Caribbean, the Scotia Arc, next to Antarctica, and on the Southwest Portuguese margin, and which could lead to the closing of the Atlantic Ocean. The 1755 Lisbon earthquake may have been the harbinger of the beginning of subduction on our margin, and there are marine geology data that support it”, concludes João Duarte. 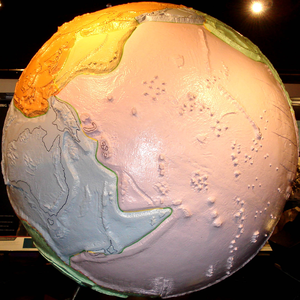 Formation of the Vanuatu subduction zone