Algae such as rockweeds are a fundamental part of marine ecosystems, providing habitat and food to many other marine organisms while also providing ecosystem services. Algae produce oxygen as a by-product of photosynthesis, so oxygenation of the water and atmosphere is one such ecosystem service. In turn, algae depend on bacteria to maintain their normal shapes and health.

New sequencing methods are illuminating the relationships between marine bacteria and marine algae, as demonstrated in research by 15 scientists from countries across the North Atlantic.

Principal investigators Susan Brawley, a professor at the UMaine School of Marine Sciences, and Hilary Morrison, a senior scientist at the Marine Biological Laboratory in Woods Hole, Massachusetts, led a team of researchers in a sweeping study funded by the National Science Foundation (NSF) of the bacteria associated with the foundational intertidal rockweed Fucus vesiculosus. The results were published in the Journal of Phycology.

The researchers found that the bacterial communities on this brown alga were similar between eastern and western shores of the North Atlantic at similar latitudes, but varied along a north to south gradient across the host biogeographic range — Greenland to North Carolina on western shores, and Norway to Spain in the eastern Atlantic. The researchers also observed the disappearance of the alga from areas of the North Carolina coast where it had long been abundant, emphasizing the pressing need to understand the bacterial-host interactions and particular bacterial communities associated with the host alga in southern regions experiencing host retreat as marine ecosystems are altered by climate change.

“Our research showed that the structure of bacterial communities on this rockweed depends upon both current and past environments, including the changing biogeographic ranges of Fucus vesiculosus related to past glacial cycles,” says Brawley. “Some of these bacteria are vital to Fucus algae. By searching for ones that are common across algal tissues over this large study with 16 field sites across the North Atlantic, we can narrow our search for the ones that determine whether this macroalga can persist on the shore.”

Previous research has shown that bacteria are so essential to the host’s structure that algae can literally fall apart if given an antibiotic treatment to remove the bacteria. The researchers hoped to find which of the bacteria were important to Fucus vesiculosus. After sequencing the bacterial communities at a portion of one of the genes that supports bacterial protein synthesis, they classified the bacteria from genus to ecotype by a marker gene analysis technique called Minimum Entropy Decomposition, which is now widely used by microbiologists. This results in each different type of bacterium being assigned a different Amplicon Sequence Variant (ASV) ID.

“This is like a molecular fishing expedition that can narrow our search for those bacteria that may be most important to the alga,” Brawley says. “Finding bacteria that are tissue-specific suggests, but doesn’t prove, that they might be particularly important to the function of the tissue and the persistence of the alga. We have isolated pure cultures of some of these bacteria and are studying their genomes, relative growth rates and competition with each other.”

For example, the study uncovered many unrecognized members of the bacterial genus Granulosicoccus through their association with particular tissues — from the holdfast that binds the alga to a surface, to the reproductive organs, to the main photosynthetic tissue. The research also revealed distinctive levels of different environmental factors that correlated with particular Granulosicoccus’ associations with Fucus at northern, central and/or southern latitudes, and showed how these Granulosicoccus relate to bacteria in this genus found on other kinds of marine life like sponges, coral, and red and green algae.

“Before you can understand how and why, you have to understand who,” Brawley says. “This is a very rich source of who is where.”

There were some unintended discoveries as part of the field research, as well. Over the course of the project’s years of field research, the scientists observed the local extinction of Fucus vesiculosus at a site in Beaufort, North Carolina, where it had long been abundant. The site was considered the southernmost range of F. vesiculosus when the study started in 2015; it had disappeared by late 2016. Temperature sensors the researchers had at the site suggested that stress from warmer air and seawater temperatures, combined with tropical storms during its autumn reproductive season, could explain its disappearance and failure to reappear through 2021.

“We don’t know where the southern edge of the U.S. range is now,” Brawley says. “We are interested as marine biologists to know how vulnerable organisms are on the shore to climate change. Our ongoing research is exploring possible effects of the bacteria on the Fucus through physiological and genomic studies. We want to know whether some bacteria are protective and whether the structure of the bacterial community on the host has been perturbed by climate change.”

Brawley isn’t the only researcher on the project with connections to UMaine. Authors Kyle Capistrant-Fossa and Charlotte Quigley are recent UMaine M.S. and Ph.D. graduates, respectively. Ester Serrão, another author on the study, received her Ph.D. from UMaine in 1996 and is now a professor and Pew Foundation Marine Fellow at the University of Algarve in Portugal.

Leigh Stearns, also a Ph.D. graduate of the University of Maine in geology and climate science, collected Fucus at its northern range in Uummannaq, Greenland, during her ongoing glaciology research there as a professor of geology at the University of Kansas. Brawley pointed out how rich on scientific and human levels it has been to have a team of researchers spanning disciplines and seven home countries.

The Journal of Phycology wrote a highlight on the article’s research and used a photograph taken in Acadia National Park at one of the study’s 16 North Atlantic field sites on the December cover.

Brawley noted that the published and ongoing studies “suggest how much the community structure of the bacteria on Fucus vesiculosus changes on yearly, seasonal, and latitudinal scales, and contributes to understanding how sensitive the microbiome of F. vesiculosus is to the changing environment.” 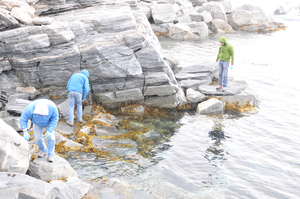