Think evolution is a slow, gradual process? Tell that to fruit flies. In a new report in Science, researchers from the University of Pennsylvania used a controlled field experiment to show that flies rapidly adapted to shifting environmental conditions with alterations throughout their genome and in a suite of physical characteristics.

Over the course of the experiment, which lasted just four months, the researchers documented changes to 60% of the flies’ genome. With this direct observation of swift and continuous adaptation in response to the environment—a phenomenon known as adaptive tracking—the biologists have established a new paradigm for how to think about the timescale of evolution.

“It was an interesting idea but thought unlikely, until we showed it,” says Paul Schmidt, a biology professor in Penn’s School of Arts & Sciences and senior author on the paper.

“What makes this so exciting is the temporal resolution with which we’re seeing evolutionary processes in real time,” says Seth Rudman, a co-lead author on the publication who performed the work as a postdoctoral fellow at Penn and is now an assistant professor at Washington State University.

It’s long been known that evolution can progress quickly in short-lived and fast-reproducing fruit flies. But exactly how fast has remained in question, specifically whether multiple traits could evolve together, continuously, in response to short-term environmental changes.

In earlier studies at Philadelphia-area orchards, Schmidt and colleagues had seen that the fruit flies present at the beginning of the growing season were quite different from those buzzing about in the late fall in measures of stress tolerance, reproductive fitness, and even pigmentation. But that research couldn’t rule out the possibility that new flies were entering the population, causing the dramatic shifts.

To more tightly control the circumstances of their studies, the team developed an experimental orchard, located on a tract of land at Pennovation Works, a short distance from Penn’s main campus. There, multiple enclosures allow Schmidt’s lab members to study flies in real-life environmental conditions—cold, heat, rain, and all—while preventing flies from entering or escaping. Thus, the insects in the enclosures at the end of an experiment are known to be the direct descendants of those released into the enclosure at the study’s beginning.

Checking in on evolution

The researchers began the current investigation by releasing 1,000 Drosophila melanogaster fruit flies in each of 10 enclosures in July of 2014. The flies were then fed the same diets, but otherwise left to their own devices. At the experiment’s peak, each population had grown to roughly 100,000 in number.

Once a month, the team removed individual flies and 2,500 eggs from each enclosure, raised them separately, then analyzed them for six different physical characteristics known to be governed by multiple genes, such as reproductive success and cold tolerance.

In addition, during each of those monthly check-ins, the researchers randomly selected 100 flies from each enclosure’s population and sequenced their genomes as a pooled group. In doing so, they could get a snapshot of the changing allele frequencies—the variations in different points in the genome—over time.

The evidence from both the physical and genome data was clear: The flies were evolving, adapting to their environment, and they were doing so faster than anyone had ever measured before.

“We see that the populations are able to track differences in the environment,” says Schmidt. “This was not a response to a single, selective event, such as a drought. The populations were constantly evolving and shifting throughout the entire experiment.”

Because flies are short-lived, the time period of a handful of weeks between each analysis translated to one to four generations of flies, or roughly ten generations over the course of the whole experiment.

Even so, the magnitude of adaptation was unexpected, with more than 60% of the flies’ genome evolving directly or indirectly during the experiment. Schmidt and Rudman note that this doesn’t mean evolutionary selection is acting on more than half of the genome—some DNA gets pulled along when other parts change in a process known as “genetic draft.”

But what made the findings particularly compelling was that the direction of adaptation changed multiple times, swinging like a pendulum as environmental conditions changed.

“To think that a trait could evolve over a certain number of weeks, and then reverse direction the following month, that was very surprising,” Rudman says. “This paints a picture of adaption and selection being really dynamic. The direction of natural selection is changing, the targets are changing, and they’re changing really quickly.”

Previous studies, the researchers explain, may well have underestimated the rate of adaptation, because they were looking only at genomic changes between two fairly distant points at time, say, A and B. By looking repeatedly and often at the same population, this experiment was designed to reveal what happened in between—a winding route of adaptation from A to B to C and back to B--fluctuations that would have been otherwise invisible.

Though fruit flies reproduce on a much more compressed time scale than humans, the researchers say their findings have relevance to longer-lived and slower-regenerating species, like humans.

“I would argue that these processes are taking place in a lot of different organisms, but they’re harder to measure over the appropriate time scales,” says Schmidt. “So, for the fruit flies, the pressures to adapt could come with the seasons, but for humans it could be climate change, agriculture, utilization of milk as a food source. This could be a general phenomenon. The burden is now on us to determine the time scale on which it is occurring.”

Paul Schmidt is professor and undergraduate chair in the Department of Biology in the University of Pennsylvania School of Arts & Sciences.

Seth Rudman is an assistant professor in the School of Biological Sciences at Washington State University. Previously he was a postdoctoral fellow at the University of Pennsylvania.

Direct observation of adaptive tracking on ecological timescales in Drosophila 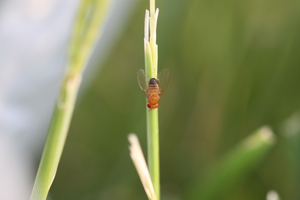 Research changes the paradigm of evolutionary timescales in fruit flies