When the European Space Agency’s Rosetta spacecraft discovered abundant molecular oxygen bursting from comet 67P/Churyumov-Gerasimenko (67P) in 2015, it puzzled scientists. They had never seen a comet emit oxygen, let alone in such abundance. But most alarming were the deeper implications: that researchers had to account for so much oxygen, which meant reconsidering everything they thought they already knew about the chemistry of the early solar system and how it formed.

A new analysis, however, led by planetary scientist Adrienn Luspay-Kuti at the Johns Hopkins Applied Physics Laboratory (APL) in Laurel, Maryland, shows Rosetta’s discovery may not be as strange as scientists first imagined. Instead, it suggests the comet has two internal reservoirs that make it seem like there’s more oxygen than is actually there.

“It’s kind of an illusion,” Luspay-Kuti said. “In reality, the comet doesn’t have this high oxygen abundance, at least not as far as its formation goes, but it has accumulated oxygen that gets trapped in the upper layers of the comet, which then gets released all at once.”

While common on Earth, molecular oxygen (two oxygen atoms doubly linked to each other) is markedly uncommon throughout the universe. It quickly binds to other atoms and molecules, especially the universally abundant atoms hydrogen and carbon, so oxygen appears only in small amounts in just a few molecular clouds. That fact led many researchers to conclude any oxygen in the protosolar nebula that formed our solar system likely had been similarly scooped up.

When Rosetta found oxygen pouring out of comet 67P, however, everything turned on its head. Nobody had seen oxygen in a comet before, and as the fourth most abundant molecule in the comet’s bright coma (after water, carbon dioxide and carbon monoxide), it needed some explanation. The oxygen seemed to come off the comet with water, causing many researchers to suspect the oxygen was either primordial — meaning it got tied up with water at the birth of the solar system and amassed in the comet when it later formed — or formed from water after the comet had formed.

But Luspay-Kuti and her team were skeptical. As the comet’s dumbbell shape gradually rotates, each “bell” (or hemisphere) faces the Sun at various points, meaning the comet has seasons so the oxygen-water connection might not be present all the time. On short time frames, volatiles could potentially turn on and off as they thaw and refreeze with the seasons.

NOW YOU SEE IT, NOW YOU DON’T

Taking advantage of these seasons, the team examined the molecular data on short- and long-time periods just before the comet’s southern hemisphere entered summer and then again just as its summer ended. As reported in their study, published March 10 in Nature Astronomy, the team found that as the southern hemisphere turned away and was sufficiently far from the Sun, the link between oxygen and water disappeared. The amount of water coming off the comet dropped precipitously, so instead the oxygen seemed strongly linked to carbon dioxide and carbon monoxide, which the comet was still emitting.

“There’s no way that should be possible under the previous explanations suggested,” Luspay-Kuti said. “If oxygen were primordial and tied to water in its formation, there shouldn’t be any time that oxygen strongly correlates with carbon monoxide and carbon dioxide but not water.”

The team instead proposed the comet’s oxygen doesn’t come from water but from two reservoirs: one made of oxygen, carbon monoxide and carbon dioxide deep inside the comet’s rocky nucleus, and a shallower pocket closer to the surface where oxygen chemically combines with water ice molecules.

The idea goes like this: A deep reservoir of oxygen, carbon monoxide and carbon dioxide ice is constantly emitting gases because oxygen, carbon dioxide and carbon monoxide all vaporize at very low temperatures. As oxygen traverses from the comet’s interior toward the surface, however, some chemically inserts into water ice (a major constituent of the comet’s nucleus) to form a second, shallower oxygen reservoir. But water ice vaporizes at a much higher temperature than oxygen, so until the Sun sufficiently heats the surface and vaporizes the water ice, the oxygen is stuck.

The consequence is that oxygen can accumulate in this shallow reservoir for long periods until the comet surface is finally warmed enough for water ice to vaporize, releasing a plume far richer in oxygen than was actually present in the comet.

“This isn’t just one explanation: It’s the explanation because there is no other possibility,” said Olivier Mousis, a planetary scientist from France’s Aix-Marseille Université and a study co-author. “If oxygen were just coming from the surface, you wouldn’t see these trends observed by Rosetta.”

The major implication, he said, is that it means comet 67P’s oxygen is, in fact, oxygen that accreted at the beginning of the solar system. It’s just that it’s only a fraction of what people had thought.

Luspay-Kuti said she wants to probe the topic more deeply by examining the comet’s minor molecular species, such as methane and ethane, and their correlation with molecular oxygen and other major species. She suspects this will help researchers get a better idea of the type of ice that the oxygen was incorporated into.

“You still have to come up with a way to incorporate the oxygen into the comet,” Luspay-Kuti said, considering that the amount of oxygen is still higher than seen in most molecular clouds. But she said she expected a majority of researchers will welcome the study and its conclusions with a sigh of relief.

The Applied Physics Laboratory, a not-for-profit division of The Johns Hopkins University, meets critical national challenges through the innovative application of science and technology. For more information, visit www.jhuapl.edu. 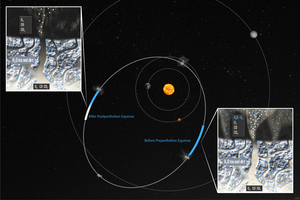 A graphic depicting the release of molecular oxygen and other volatile molecules from two reservoirs inside comet 67P. 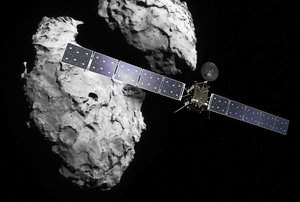