Two Singapore-designed artefacts are now orbiting around the Earth on the International Space Station (ISS), as part of Moon Gallery.

These artworks were successfully launched into space recently as part of a test flight by the Moon Gallery and will come back to Earth after 10 months.

Currently consisting of 64 artworks made by artists all around the world, the Moon gallery will eventually consist of 100 artworks, which will then be placed on the moon by 2025. Out of these 64 art pieces on the ISS, only two are Singaporean artworks.

To mark this historic milestone in our nation’s history, Nanyang Technological University, Singapore (NTU Singapore) held a hybrid event today (14 March) to celebrate the successful launch of the Moon Gallery to the ISS.

These artworks are two metal cubes featuring unique artworks, each measuring 0.98 cm all around, designed by Singaporean artist and architect Ms Lakshmi Mohanbabu, who sought to create new artworks using technology and to revolve around concepts of unity, diversity, and complexity in humankind.

Both cubes were borne out of a partnership between Ms Lakshmi and scientists from the Nanyang Technological University, Singapore (NTU Singapore), supported by the National Additive Manufacturing Innovation Cluster (NAMIC), a national programme office which accelerates the adoption and commercialisation of additive manufacturing technologies.

The first cube, titled “The Cube of Interaction”, was prototyped in collaboration with NTU Assoc Prof Daniel New from the Singapore Centre of 3D Printing, where they printed two iterations of the cube in different materials and identified the most suitable material. The final version was then manufactured by a local vendor via machining.

The second cube named “Structure & Reflectance”, features four unique faces that is made by changing the crystal orientation of the steel during the 3D printing process. This is a proprietary technique developed by Asst Prof Matteo Seita and his team from NTU’s School of Mechanical and Aerospace Engineering and the School of Material Sciences and Engineering.

The artworks are held securely in an 8 cm x 8 cm grid tray, which is a "plug and play" research module provided by Nanoracks, a United States space services company.

Each artwork is smaller than 1 cm all around and thus is free to float around freely in space within their cube space. This allows for the experiment to see how the materials and designs will behave in the microgravity of space. 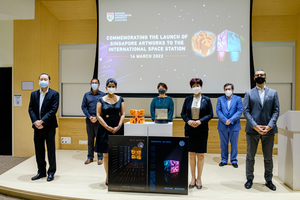 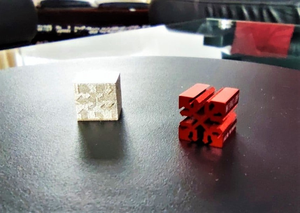 The two Singapore artworks which are in the Moon Gallery