A new book, which tells the stories of thousands of forced and slave labourers caught up in the Nazi occupation of Alderney in the Second World War, has been published.

'Adolf Island'; The Nazi Occupation of Alderney offers new forensic, archaeological and spatial perspectives on the Nazi forced and slave labour programme that was initiated on the Channel Island of Alderney.

The book is the culmination of ten years’ research carried out by Staffordshire University forensic archaeologists Professor Caroline Sturdy Colls and Associate Professor Kevin Colls. Their investigations on the island have also been the subject of a TV documentary which was screened on the Smithsonian Channel in 2019.

The co-authored ‘Adolf Island'’ moves beyond previous studies that focus on military aspects of occupation and argues that Alderney was intrinsically linked to wider systems of Nazi forced and slave labour. The book also includes the results of the first archaeological investigations at numerous camps, burial places and work sites across the island, where the researchers also discovered evidence of mass graves.

“Although the documentary film alluded to the presence of clandestine burials, this is the first time that we have published the results about this and we provide concrete evidence that unmarked graves remain on British soil,” said Sturdy Colls, Professor of Conflict Archaeology and Genocide Investigation.

“The book also examines in some detail what happened to the labourers who survived Alderney as well as presenting evidence concerning those who died there, many of whom remain missing persons.”

The analysis of documentary records, witness testimonies and graves lead researchers to conclude that a minimum of between 701 – 986 men were killed on Alderney, up to 600 of whom have never been found. The authors conclude that the true number is, undoubtedly much higher due to the Nazis’ attempts to hide their crimes.

Prof Sturdy Colls added: “Numerous prisoners mentioned that the conditions on Alderney were worse than they experienced elsewhere, including those incarcerated in notorious concentration camps across Europe. The awful conditions were also evidenced by the architecture of camps we surveyed and the burial sites we located.”

More than 6,600 forced and slave labourers were sent to Alderney from Europe and North Africa as part of Nazi construction programmes. Most came from Ukraine, Russia, Poland and other Soviet territories but the workforce also included large numbers of French Jews, German prisoners, people fleeing from Franco-controlled Spain and natives of the Channel Islands. These men were held in at least 20 camps, incarceration sites and farms across the island. Hundreds more volunteer labourers, including a small group of women, also worked on the island.

Published by Manchester University Press, the book’s chapters cover the work, life, death of the forced and slave labourers on Alderney, providing new insights into the identities of the people who lived, worked and died there.

Professor Sturdy Colls stressed the importance of understanding individual stories. “What this book attempts to do is to re-humanise the thousands of forced and slave labourers who were sent to Alderney. As in any atrocity, people become fixated on the numbers and victims become de-humanised but these were men who had lives and families which were ripped apart during the Second World War.”

Drawing on their archaeological investigations and extensive archival research, ‘Adolf Island’’ characterises the network of concentration and labour camps, fortifications, burial sites and other material traces connected to these labourers and the occupation.

“This is why an archaeological perspective on the crimes perpetrated is so important, as information missing from the archival record can be supplemented by the analysis of physical evidence.”

Colls added: “Forensic investigation alongside traditional research methods has enabled us to uncover much of the truth about what happened in Alderney during the Second World War. We now know much more about the camp system – which included two concentration camps ran by the SS – and about the efforts by the Nazis to hide their crimes.

“While the publication of the book is the culmination of that research and a significant milestone, we will be continuing our programme of educational activities and continuing to tell the stories of those who suffered and died.” 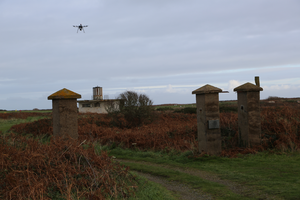