While the billions of tons of plastic products produced in the “Plastic Age” of the last half-century have drastically changed the way we live for the better, the plastic waste that has made it into the environment is posing new challenges for nature.

Seeking to simulate the fate of plastics that have made it into our oceans, a new study led by Kyushu University estimates that 25.3 million metric tons of plastic waste has entered our oceans and nearly two-thirds of that cannot be monitored.

Even more alarmingly, the analysis suggests that this may only be the tip of the plastic-waste iceberg, with another 540 million metric tons of mismanaged plastic waste—nearly 10% of all plastic produced so far—still trapped on land.

While scientists have been surveying the oceans’ surfaces and beaches to determine how much plastic waste has made it into the oceans, copious amounts of ocean plastics are thought to be well below the surface or on the seafloor, hidden from the reach of scientific observation using common sampling gear.

“To assess the amount and whereabouts of plastic waste in Earth’s oceans, we have to consider the whole process from their birth to burial, starting with emission from rivers into the ocean and continuing with their transportation and fragmentation into pieces,” says Atsuhiko Isobe, professor at Kyushu University's Research Institute for Applied Mechanics and leader of the study.

In the new work, Isobe’s team attempted to estimate the amount of these hidden ocean plastics by creating models that simulate these processes. They drew on existing studies to derive parameters that describe how plastics breakdown and age, and used satellite-derived wind data to incorporate movement of the particles.

As sources of plastic waste for the simulations, they adjusted recent estimates of plastic-debris emission in rivers by either the country’s gross domestic product going back to 1961 or predictions of mismanaged plastic waste generation after 2010. They also added an ocean-based component from the worldwide fisheries industry, which is said to produce 20% of river plastic emissions.

Their results estimate that large plastics and smaller pieces of so-called microplastics floating on the ocean surface each account for only about 3% of all ocean plastics. While a similar amount of microplastics—plastic fragments less than five millimeters in size—was estimated to be on beaches, 23% of the ocean plastic waste was larger plastic litter on the world’s shores.

However, the simulations suggest that the remaining two-thirds of ocean plastic may be in locations that make it impossible to monitor. A little over half of this is heavy plastics that settled on the seafloor because they are denser than seawater. Half of plastic products today are made from these heavy plastics, which include polyethylene terephthalate (PET) and polyvinyl chloride (PVC).

The remainder are old microplastics emitted years and decades earlier that have since been removed from the ocean surface and beaches and stored in the ocean floor and elsewhere in the world’s oceans.

But compared to ocean plastics, the amount of mismanaged plastic waste on land that could find its way into ecosystems and the ocean in the future may be twenty times larger.

Being indecomposable in nature, this half a billion metric tons of mismanaged plastics will most likely outlive humans on this planet.

“We were able to estimate the budget of ocean plastics, but they are only the tip of plastic-waste iceberg on Earth,” says Isobe. His next task is to assess the whereabouts of the nearly half a billion metric tons of mismanaged plastics trapped on land.

“That’s going to be a Herculean task. Few advancements have been made so far in the field of ‘terrestrial plastics’ due to the lack of observation methods.”

Undeterred, Isobe recently launched a citizen science program using crowdsourced photos and AI to assess the mass of plastic waste dumped in cities and on beaches. At the same time, he is continuing to monitor and develop our understanding of what is happening to the plastics that make it to our oceans.

For more information about this research, see “The fate of missing ocean plastics: Are they just a marine environmental problem?” Atsuhiko Isobe and Shinsuke Iwasaki, Science of The Total Environment (2022). https://doi.org/10.1016/j.scitotenv.2022.153935

Kyushu University is one of Japan’s leading research-oriented institutes of higher education since its founding in 1911. Home to around 19,000 students and 8,000 faculty and staff, Kyushu U's world-class research centers cover a wide range of study areas and research fields, from the humanities and arts to engineering and medical sciences. Its multiple campuses—including the largest in Japan—are located around Fukuoka City, a coastal metropolis on the southwestern Japanese island of Kyushu that is frequently ranked among the world’s most livable cities and historically known as a gateway to Asia.

The fate of missing ocean plastics: Are they just a marine environmental problem?

Visible ocean plastics just the tip of the iceberg 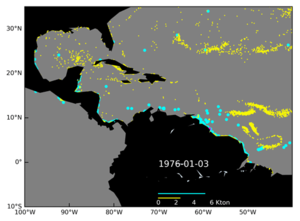 Simulation of ocean plastics in 1976 in North and South America 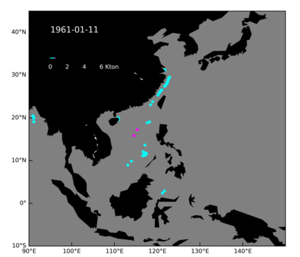 Plastic emission between 1961 and 1962 in East and Southeast Asia