A team of scientists led by Nanyang Technological University, Singapore (NTU Singapore) has developed a method to effectively produce and extract plant-based oils from a type of common microalgae.

As the oils produced from the microalgae are edible and have superior properties as those found in palm oil, the newly discovered method would serve as a healthier and greener alternative to palm oil.

Compared to palm oil, the oil derived from the microalgae contains more polyunsaturated fatty acids, which can help reduce ‘bad’ cholesterol levels in blood and lower a person’s risk of heart disease and stroke. The microalgae-produced oil developed in collaboration with scientists from the University of Malaya, Malaysia, also contains fewer saturated fatty acids, which have been linked to stroke and related conditions.

Palm oil is the world’s most popular vegetable oil, featuring in around half of all consumer products, and plays a central role in a large range of industrial applications[1]. Farmers produced 77 million tonnes of palm oil for the global market in 2018, and that is expected to grow to 107.6 million tonnes by 2024[2].

However, the rapid expansion of oil palm plantations is blamed for massive deforestation in several countries[3], destroying the habitat of endangered native wildlife.

To produce the oils, pyruvic acid, an organic acid that occurs in all living cells, is added to a solution with the algae Chromochloris zofingiensis and exposed to ultraviolet light to stimulate photosynthesis. The NTU team has separately developed cost-cutting innovation to replace the microalgae culture medium with fermented soybean residues while improving the yield of microalgae biomass.

After 14 days, the microalgae is washed, dried, and then treated with methanol to break down the bonds between the oils and the algae protein, so that the oils can be extracted. The team has also developed green processing technology to extract efficiently microalgae-derived plant oils.

To produce enough plant-based oil to manufacture a store-bought chocolate bar that weighs 100 grams, 160 grams of algae would be required.

The algae oil innovation presents a possible alternative to the cultivation of palm trees for oil. It also reflects NTU's commitment to mitigating our impact on the environment, which is one of four humanity’s grand challenges that the University seeks to address through its NTU 2025 strategic plan.

The results of the study were published in the peer-reviewed academic publication Journal of Applied Phycology in February.

Professor William Chen, Director of NTU’s Food Science and Technology (FST) Programme, who led the project, said: “Developing these plant-based oils from algae is yet another triumph for NTU Singapore, as we look to find successful ways to tackle problems in the agrifoodtech chain, especially those that have an adverse impact on the environment. Uncovering this as a potential human food source is an opportunity to lessen the impact the food supply chain has on our planet.”

Besides serving as a greener alternative to cultivating palm trees for plant-based oils or fat, the NTU-developed technique also has the potential to help cut down on greenhouse gas emissions, as well as food waste.

The scientists say that when scaled up, the production of the plant-based oils with natural sunlight, instead of using ultraviolet lights, would help remove carbon dioxide from the atmosphere by converting it to biomass and oxygen via photosynthesis. As the microalgae grows, it converts carbon dioxide to biomass at relatively fast rates.

In a separate study, the scientists at NTU’s Food Science and Technology programme have also developed a process to produce the key reaction ingredient needed to cultivate the microalgae oil, pyruvic acid. This is done by fermenting organic waste products, such as soybean residues and fruit peels, which would not only reduce production costs, but help cut down on food waste.

Prof Chen added: “Our solution is a three-pronged approach to solving three pressing issues. We are capitalising on the concept of establishing a circular economy, finding uses for would-be waste products and re-injecting them into the food chain. In this case, we rely on one of nature’s key processes, fermentation, to convert that organic matter into nutrient-rich solutions, which could be used to cultivate algae, which not only reduces our reliance on palm oil, but keeps carbon out of the atmosphere.”

The scientists will be working on optimising their extraction methods to improve yield and quality. The research team has received interest from several food and beverage partners and could explore scaling up their operations within two years.

Due to the oils’ properties, the NTU team will be exploring adding them to plant-based meats to improve their texture and nutritional properties. They also hope to explore pharmaceutical and cosmetic uses in products such as topical creams, lipsticks, and more. 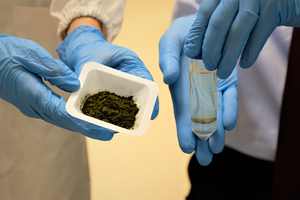